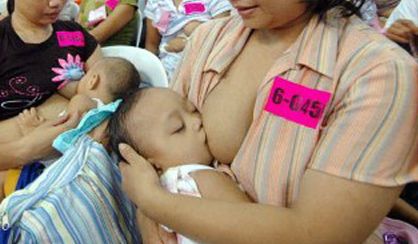 An Icelandic lawmaker spoke in parliament while breastfeeding her six-week-old baby in what she described as ‘the most natural thing in the world.’ The image shows Filipino mothers participating in an event to promost breastfeeding. INQUIRER FILE

REYKJAVIK, Iceland — An Icelandic deputy spoke in parliament on Wednesday while breastfeeding her baby daughter in the full glare of live television cameras, an act she described as “the most natural thing in the world”.

Unnur Bra Konradsdottir, of the right wing Independence Party, stood to make her comments in the Althingi (parliament) while feeding the six-week old girl.

“On the contrary, she would have been bothered if I had stopped feeding her to speak,” the mother-of-three added.

Icelandic media confirmed that this was a first for the country which is at the forefront of gender equality and gave the world, in 1980, the first democratically elected female head of state, Vigdis Finnbogadottir.

The deputy said the rigors and responsibilities of political life did not alter her duties as a mother.

Breastfeeding in public has become a hot topic in many countries. For the Icelandic MP, however, “it is the most natural thing in the world”.

Elected to parliament in 2009, Konradsdottir is a member of its social protection committee and heads the committee on school affairs. CBB

Read Next
US destroyer again targeted by missile off Yemen
EDITORS' PICK
Lacson wants DOF to suspend TRAIN law as oil prices rise
Next level mobile photography within reach with vivo X70 co-engineered with ZEISS
Leaked: A 60x Zoom and all-new Helio G96 mean a complete overhaul for TECNO Mobile’s new CAMON 18 series
Delivering delight against all odds
153 protests filed vs China actions in PH waters in 2021 — DFA
Duterte blasts rights groups for overlooking the ‘other side’ of drug war
MOST READ
Robredo to supporters: Be calm, gentle and do good deeds
Duterte inaugurates P684-M bypass road project in Quezon
Matibag calls Senate budget hearing ‘political,’ gets kicked out
Duterte: No drug dealers among the rich in PH
Don't miss out on the latest news and information.