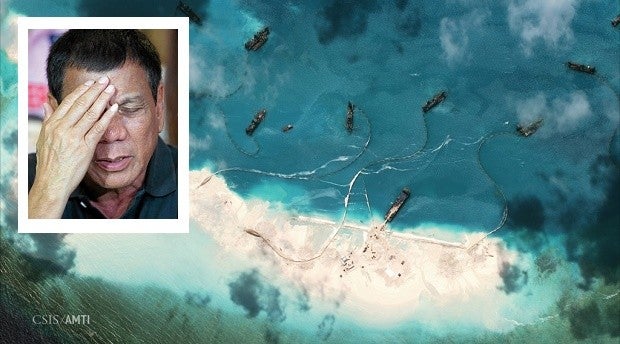 Malacañang said on Wednesday that President Duterte was determined to stop joint patrols with the United States in the South China Sea despite Supreme Court Associate Justice Antonio Carpio’s reminder that the Constitution mandated the state to protect the country’s territorial waters and exclusive economic zone (EEZ).

Presidential spokesperson Ernesto Abella said Mr. Duterte ordered a stop to joint patrols between the Philippine Navy and the US Navy because he did not want any Philippine action that China might deem hostile.

The two navies began joint patrols in the South China Sea in April under the Enhanced Defense Cooperation Agreement signed by the Philippines and the United States two years ago.

The joint patrols began as the UN-backed Permanent Court of Arbitration in The Hague prepared to hand down a decision in an action brought by the Philippines challenging China’s claim to 90 percent of the South China Sea, including waters within the Philippines’ 370-kilometer EEZ.

On July 12, the tribunal ruled against China, saying it had no historic title to the South China Sea and had violated the Philippines’ right to fish and explore for resources in waters within its EEZ.

China, which refused to take part in the arbitration proceedings, rejected the decision, saying it would not change the situation in the South China Sea.

To assert its claims in the South China Sea, China is building artificial islands on reefs in the Spratly archipelago, topping some with airstrips that can handle large military planes.

The militarization of the area has raised tensions between China and its rival claimants—Brunei, Malaysia, the Philippines and Vietnam—but Beijing blames the tensions on the United States, which it claims is trying to contain its rise as a potential economic and military power in Asia.

Last month, Mr. Duterte said there would be no more joint patrols, as he did not want the Philippines to be dragged into a conflict between the United States and China over dominance in the South China Sea.

But Carpio, who has done extensive studies of the territorial dispute between the Philippines and China, said Mr. Duterte had a duty to protect the country’s territory.

Speaking to reporters at the closing ceremonies of the Philippine Amphibious Landing Exercise (Phiblex 33) at Philippine Marine Corps headquarters in Taguig City on Tuesday,  Carpio said the Constitution mandated the State to protect the country’s waters, which can be done only by sending patrol vessels to prevent foreigners from poaching on the country’s marine resources.

“There is only one power on earth that can stop the Chinese from poaching on the Philippine EEZ and that is the [United States],” he said.

Abella said Mr. Duterte’s decision had been “carefully considered” and “is fully aware of his responsibility regarding the EEZ.”

“He has his own alternatives regarding the matter,” he added.

Speaking during the Philippine Coast Guard anniversary on Wednesday, Mr. Duterte reiterated that he would not break any of the Philippines’ security agreements with the United States.

But he said Phiblex 33 was definitely the last joint military exercises of his presidency.

He said he had instructed Defense Secretary Delfin Lorenzana not to make preparations for joint maneuvers next year.

“It’s about time we change the rules here,” Mr. Duterte said. “I insist that we realign, that there will be no more exercises next year. Do not prepare, I told Defense Secretary Lorenzana. Do not make preparations for next year’s [war games]. I don’t want it anymore.”

“I will chart an independent foreign policy. We will not break or abrogate existing treaties because they say this will provide us with an umbrella,” Mr. Duterte said.

But he expressed cynicism about how the treaties could protect the Philippines, especially in a catastrophic World War III.