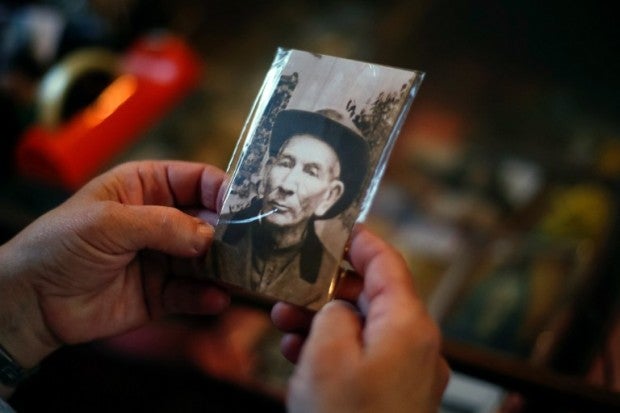 A person holds a picture of first would-be Argentinian saint Jose Gabriel Brochero also known as “Cura Gaucho”, at the museum of the Nuestra Senora del Transito sanctuary, in Villa Cura Brochero, Argentina, on September 20, 2016. The Cura Gaucho will be canonized by Pope Francis on October 16 in Rome.  AFP

VILLA CURA BROCHERO, Argentina — Nicolas Flores was supposed to live the rest of his life in a vegetative state, but today he walks, talks and swims — one of the miracles attributed to a “cowboy priest” who will become Argentina’s first saint Sunday.

Sixteen years ago, when Nicolas was nearly killed in a car crash, his father prayed to a late priest named Jose Gabriel Brochero, who is revered in Argentina for his supposedly miraculous healing powers.

Brochero, a blind leper who lived from 1840 to 1914, was known for traveling on a mule across the vast Argentine pampas, or plains, to minister to the poor.

He was beatified, or declared blessed, in 2013 by his fellow Argentine, Pope Francis, who called him a “shepherd who smelled of sheep, (who) became poor among the poor.”

Like his compatriot the pope, Brochero was known for his ascetic lifestyle and his love of mate — a strong tea drunk from a gourd that is Argentina’s national beverage.

He is often depicted wearing the colorful poncho of Argentina’s gauchos, or cattle herders, his mate gourd in hand.

Nicolas’s father, Osvaldo Flores, is convinced Brochero’s intercession saved his then-infant son, whose head was crushed in the car accident, and who went into cardiac arrest three times at the hospital.

He isn’t the only one who thinks so.

The Catholic Church’s Congregation for the Causes of Saints, which oversees the complex process of canonization, has credited Brochero with at least two posthumous miracles, clearing the way for him to become a saint.

Nicolas was just 11 months old when the car he was traveling in with his mother and grandparents was involved in a horrible crash, killing his grandfather and leaving the others in critical condition.

Emergency workers declared him dead at the scene, before realizing he was breathing faintly.

“It’s almost inexplicable the boy survived,” said pediatrician Carlos Rezzonico, who participated in a case study of Nicolas at the Vatican’s request.

At his office, the 89-year-old doctor shows brain scans of Nicolas’s head. The left half of his skull is empty space.

“If I didn’t know the patient, I would say this person had major neurological damage,” said Rezzonico.

“It’s inexplicable from a medical point of view” that the 16-year-old’s cognitive and motor functions are not more impaired, he said.

Nicolas has some difficulty speaking, but is a largely functional teenager.

He cheers for his favorite football team, River Plate; attends a specialized school; swims; and goes to physical therapy twice a week for his injuries.

“Nico has an energy and will power that surprise me every day,” said his physical therapist, Yanina Paola Varas.

Nicolas, like his parents, is convinced he owes his good fortune to Father Brochero.

“I get butterflies in my stomach when people talk to me about it,” he said.

A young girl named Camila Brusotti is the second miracle attributed to Brochero.

In 2013, when she was nine years old, she was rushed to the hospital after being severely beaten by her mother and step-father.

As the couple blamed each other for her injuries during a police interrogation, the girl’s grandmother prayed to Father Brochero.

Camila spent months in a coma. Doctors said she would probably live the rest of her life in a vegetative state.

But today, she is completely normal.

Her parents went to prison. Her grandmother is raising her to keep praying to Father Brochero — like thousands of pilgrims who flock each year to a small town in central Argentina that bears the priest’s name, Villa Cura Brochero. CBB