Inconsistencies seen in testimonies in House inquiry into illegal drugs

After four hearings totaling 47 hours, opposition congressmen assailed what they saw as inconsistencies in the testimonies of witnesses presented by Justice Secretary Vitaliano Aguirre II that sought to link Sen. Leila de Lima to the illegal drug trade at New Bilibid Prison (NBP) when she was the justice secretary.

“The committee is in a quandary on how to appreciate the testimonies of Jaybee Sebastian vis-à-vis Joenel Sanchez because the two are in total contradiction. One of them is lying,” Rep. Reynaldo Umali, chair of the House of Representatives committee on justice, conceded at the close of its final hearing on Monday that lasted nearly 14 hours.

By then, the panel had presented 22 witnesses, including 14 NBP inmates.

Sebastian, a convicted kidnapper and car thief, testified that Sanchez had demanded and received money from him on behalf of De Lima.

He said he gave a total of P10 million to De Lima’s campaign kitty.

Sebastian also implied that De Lima and Sanchez, her former security aide from the Presidential Security Group (PSG), were lovers.

Sanchez had earlier told the committee that De Lima’s former driver and alleged lover, Ronnie Dayan, was her bagman.

Sanchez denied the inmate’s accusation, saying that he did not ask for immunity unlike Sebastian. Moreover, Sanchez said he had 19 years of unblemished service at the PSG.

Sebastian and Herbert Colanggo, ironically rival gang leaders, both claimed that Sanchez was the senator’s bagman. While Sebastian said he did not know Dayan, Colanggo and the other convicts implicated Dayan.

Colanggo was among the 19 drug lords transferred to the National Bureau of Investigation jail after the December 2014 raid led by De Lima purportedly to dismantle the drug syndicates in the national penitentiary, a move the inmates said was aimed at consolidating Sebastian’s hold on the narcotics business so he could raise funds for her senatorial campaign. 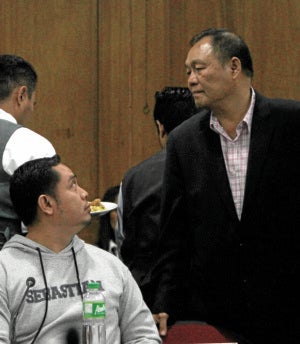 DRUG TRADE PROBE High-profile inmate Jaybee Sebastian meets another resource person, former Bureau of Corrections officer in charge Rafael Ragos, during the hearing of the House of Representatives’ committee on justice,which is looking into the illegal drugs trade at New Bilibid Prison. The two gave conflicting testimonies. —RICHARD A. REYES

Umali asked the Philippine National Police, NBI, Philippine Drug Enforcement Agency and PSG to “give a position paper and guide the committee on how to treat these two statements.”

“Jaybee Sebastian has been granted immunity. If he is found to be lying, he violated the condition of the immunity. If Joenel is lying, he has to be punished,” Umali said.

“The inconsistencies are so great that it really affects the weight of the evidence… They are still under detention. You know the culture at the penitentiary. They have nothing to lose but everything to gain if they will testify in accordance to what the administration wants. The element of quid pro quo it is still there. You cannot deny that, no matter how much (Aguirre) said that they were not forced or guided,” Rocamora told reporters.

Magdalo Rep. Gary Alejano said that with the convicts detained at NBP, technically under the control of the Bureau of Corrections and the Department of Justice, “they are forced, polluted witnesses” who could give testimonies under duress.

Opposition lawmakers led by Albay Rep. Edcel Lagman said that they did not attend the congressional hearings because they believed it was a tool to persecute De Lima, a staunch critic of President Duterte.

“The purpose really was to link Senator De Lima to the drug deals and secure possible complaint against her,” Lagman said.

Caloocan Rep. Edgar Erice said the inquiry was a “propaganda tool to cover up for the investigation in the extrajudicial killings.”

Ifugao Rep. Teddy Baguilat said the hearings were a “publicity stunt.” He said these cast a “chilling effect” on critics of the Duterte administration’s antidrug war, a warning “that this is what would happen to you.”