LUCENA CITY—The House of Representatives’ focus on drug-related hearings has relegated discussions of social reform issues, such as the return of assets acquired through the multibillion-peso coconut levy fund, to the sidelines, a leader of a farmers’ group said.

“Congress is on fire in the case of Sen. Leila de Lima, yet it is ice cold in the coconut levy recovery for the benefit of coconut farmers,” Danny Carranza, secretary general of Kilusan para sa Tunay na Repormang Agraryo at Katarungang Panlipunan, said on Monday.

Carranza was referring to the congressional hearings that focused on the drug trade that linked De Lima, a former Department of Justice secretary, and high-profile inmates at New Bilibid Prison (NBP).

Carranza reminded House Speaker Pantaleon Alvarez that the return of the coco levy fund is one of the campaign promises of President Duterte, who vowed that it will be one of his priority tasks in his first 100 days in office.

He said the needed legislation for the return of the levy fund remains to be tackled because Congress is busy with the investigation on the drug trade and other issues at NBP. 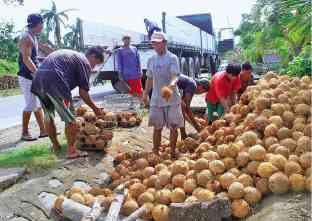 Carranza appealed to Mr. Duterte to exert effort to mobilize his allies in Congress to pass the measure that would benefit coconut farmers across the country.

Farmers in Quezon, a major coconut-producing province, are believed to be the biggest contributors to the coco levy fund exacted during the administration of the late strongman Ferdinand Marcos.

The fund and its assets, estimated by the Presidential Commission on Good Government to be worth P83 billion, were sequestered by the government after Marcos was ousted by a citizen revolt in 1986.

The Supreme Court has ruled the levy as public fund and should be used by the government for the benefit of coconut farmers and to develop the coconut industry.

“Most of [these farmers] are now old, sickly and dying. They all need the support of our local officials for the final push in realizing their dream [of receiving proceeds from the coco levy fund],” said Maribel Luzara, president of Kilusang Magbubukid sa Bondoc Peninsula.