The Land Transportation Franchising and Regulatory Board (LTFRB) is mulling lifting by year-end its more than a decade-old ban on releasing a franchise to public utility vehicles (PUVs) once local government units (LGUs) nationwide submit their respective public transportation plans.

The lifting of Memorandum Circular No. 2003-028 loomed as LTFRB Chair Martin Delgra III said he had uncovered corruption allegations against some of his men due to the moratorium imposed during the Arroyo administration. At the same time, he noted that major urban areas in the country were trying to find ways to cope with heavy traffic.

According to him, the plans will show which routes were over-served or under-served,
allowing the LTFRB to create new ones for the riding public. 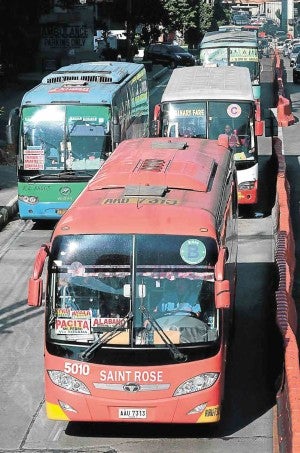 Transport operators may soon be able to apply for a franchise legally, without resorting to bribing corrupt LTFRB personnel. —Inquirer file photo

In a report on his first 100 days in office, Delgra said that through their regional visits, they were able to learn that PUV transport operators pay from P14,000 to as much as P500,000 just to obtain a valid franchise, with the connivance of unscrupulous LTFRB employees.

There is no franchise fee, only a P520 fee for processing the application, he clarified.

LTFRB Board Member Aileen Lizada said that in the 13 years the ban has been in effect, the unauthorized fees collected from transport operators
looking for a franchise may run into the “hundreds of millions.”

Delgra affirmed President Duterte’s observation that the LTFRB was one of the most corrupt government agencies. In fact, 39 LTFRB officials and employees have either retired, resigned or been terminated since July due to “issues of corruption.”

“We need to understand and realize that there is a serious problem of corruption [in the agency]. Otherwise, we will never find a solution to address the issue. We can’t be in denial here,” Delgra added.