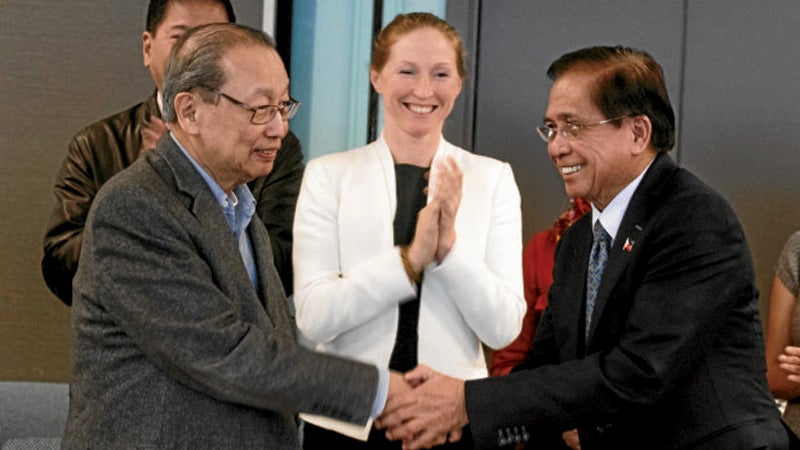 2016The government and the National Democratic Front close the second round of talks with them agreeing on the amnesty and releases of political prisoners and the outline and framework on socio-economic reforms, political and constitutional reforms and the end of hostiles and disposition of forces. KARLOS MANLUPIG

OSLO—A draft proclamation granting amnesty to 434 political prisoners has been submitted to Malacañang and is awaiting the signature of President Durterte, according to a member of the government panel talking peace with communist insurgent leaders.

The amnesty, according to communist leader Jose Ma. Sison, was a prerequisite for the declaration of a joint bilateral ceasefire or suspension of hostilities.

Government negotiator Angela Librado-Trinidad said the draft amnesty proclamation was submitted to the Office of the President on Sept. 27 just days before the second round of talks started.

The draft amnesty proclamation covering 434 political prisoners was based on a list submitted by the National Democratic Front of the Philippines (NDFP) on Sept. 15.

Eighty-one of the political prisoners, including women and the elderly, were also considered for immediate release based on humanitarian considerations.

Labor Secretary and government panel chief Silvestre Bello III said that the release of the political prisoners was just “a matter of time.”

“I see no reason why we cannot do it the way we are accelerating the peace process,” Bello said.

Presidential adviser on the peace process Jesus Dureza shared this view but added that “there are government processes that must be considered before an amnesty declaration can be issued.”

Jose Ma. Sison, Communist Party of the Philippines founding chair, had said there would be no bilateral ceasefire between the government and the communists until all the remaining political prisoners were released.

Sison said he was happy over the release of at least 21 detained consultants of the NDFP who were covered by the Joint Agreement on Safety and Immunity Guarantees (JASIG), but lamented that no releases followed after the first round of talks.

The releases happened just in time for the resumption of the formal talks in Norway in August.

Speaking on the sidelines of the second round of talks, Sison said “the negotiations will continue but will be short of signing if there is no amnesty.”

The amnesty was floated during the first meeting between the NDFP and President Duterte a few days after he won the elections.

“The amnesty and release of all political prisoners is a good incentive for the signing of a joint and bilateral ceasefire agreement,” Sison said.

Meanwhile, Librado-Trinidad said the government was reconstituting the Presidential Committee on Bail, Recognizance and Pardon (PCBREP), the guidelines of which had already been signed by the secretaries of the Department of Justice, Department of Interior and Local Government, and Department of National Defense, as part of the compliance of the government to facilitate the release of political prisoners.

This is in compliance with the commitment of the government panel to recommend to the President the immediate release of these prisoners.

“The guidelines have already been signed by the secretaries of the three departments and is on its way to the office of the President for review and signing,” she said.