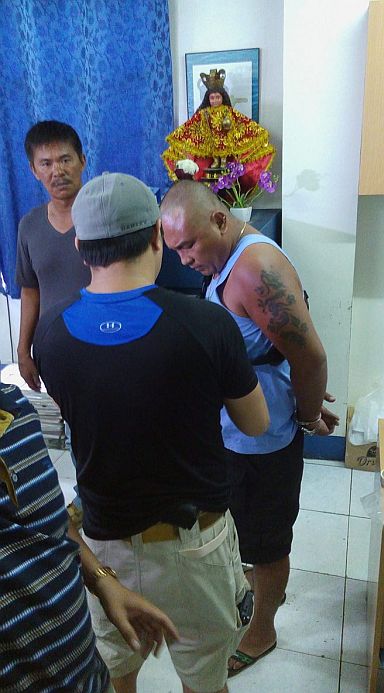 CEBU CITY —  The driver of a getaway vehicle used by a suspected hit-man in fleeing from lawmen who were searching his house for illegal guns in Talisay City surrendered  past 9 p.m. on Wednesday,  seven hours after the hitman’s group shot it out with police.

Adhmann Sigue Canangca-an, 40, said his cousin, a policeman, persuaded him to yield to authorities.

“Gusto nako i-clear ang akong name. (I wanted to clear my name),” he told reporters when he was brought by Talisay City policemen to the Cebu Provincial Police Office Thursday morning.

Canangca-an said he only drove his cousin, alleged hitman-for-hire Felix Abacajan Jr. —  one of the targets of a police operation last Wednesday —  and insisted he wasn’t involved in the shootout that killed two suspects.

Despite his claim, charges of attempted murder will be filed against Canangca-an before the Cebu City Prosecutors’ Office, according to Supt. Germano Mallari, chief of the Cebu Provincial Police Intelligence Branch.

Recovered inside the Nissan Navara driven by Canangca-an were a bullet-proof vest, a gun box, and two cotton swabs.

Mallari said Canangca-an would be subjected to paraffin test to find out whether he recently fired a gun.

Abacajan and his brother Joeser were the subjects of a search warrant issued by Judge Gilbert Moises of the Regional Trial Court Branch 18 for illegal possession of firearms.

Abacajan, a barangay councilor of Maghaway, Talisay City, and chairman of the village’s committee on peace and order, managed to escape after they boarded the vehicle driven by Canangca-an in the middle of the armed encounter.

Mallari said the Talisay City Police has launched a hot pursuit operation for Abacajan who reportedly sustained a gunshot wound in the left shoulder.

“We’re coordinating with all hospitals in Cebu to trace the possible whereabouts of Felix,” he said.

Mallari said they have been validating reports that Abacajan and his companions were connected to drug lord Franz Sabalones., who has surrendered to the Philippine National Police.

The police also received information that bodies were buried by the group at Abacajan’s farm in Talisay City.

“We’re validating all these reports. So far, we have not verified any of these,” Mallari said.

He said the firearms and ammunitions they seized from Abacajan’s residence would be subjected to ballistics examinations to find out if they were used in other crimes.

“There’s a possibility that we can solve many cases out of what we seized,” Mallari said.

Last August, the police received a report that Abacajan and his group conducted checkpoints in Talisay City to look for the man who attempted to kill Abacajan.

“They were bringing high-powered firearms and they flagged down all motorcycles who passed by the place,” Mallari said.

The police validated the report and applied for a search warrant from the court. When they secured the search warrant, the Talisay City police immediately went to Abacajan’s house to implement it.

The Provincial Intelligence Branch operatives sought reinforcements from the Talisay City police, Special Weapons and Tactics, and the Regional Special Operations Group in trying to arrest the suspects.

In an interview, Canangca-an said Abacajan went to his house in Barangay Lawaan, Talisay City at around 12 noon last Wednesday.

He said Abacajan requested him to drive him to his residence after the latter received a call regarding the presence of armed men at his place in Maghaway.

Canangca-an said he brought Abacajan to his residence and farm as he had requested.

Abacajan got off the vehicle and proceeded to his house, leaving the driver, Canangca-an inside the vehicle.  After several minutes, he was surprised to see Abacajan running towards him with a gunshot wound in the shoulder.

“Lisud kon dili nako siya (Felix) pasakyon kay nagdagan naman siya. (I could not stop Felix from boarding the vehicle because he was in danger),” said Canangca-an, a jeepney operator.

He said he brought Abacajan to Barangay Linao in Talisay City before he proceeded to Barili town, south Cebu with his wife to buy door jambs for their newly constructed house.

“Basta wala gyud koy apil ana. Wa koy gibuhat nga dautan. (I was not involved in the shootout. I have not committed any infraction),” said Canangca-an.  SFM/rga

Read Next
De Lima urges Filipinos: Stand up for truth even if unpopular
EDITORS' PICK
Metro Manila logged most number of new COVID-19 cases — OCTA Research
WHO says monkeypox is not yet a health emergency
House energy committee chair Arroyo bats for cheap electricity
A massive highway complex makes living in the South highly attractive
Beyond the Chocolate Hills: A farm-to-table, heritage culinary adventure of Bohol
Guarding Sara: Why next VP is getting own security team
MOST READ
Leon Barretto steps up for sisters, asks dad Dennis Padilla: ‘Please stop resorting to public shaming’
LOOK: Rita Daniela pregnant with first child
Bea Alonzo, under lie detector test, says she wants prenup agreement with future husband
Marjorie Barretto to speak up on Dennis Padilla, kids’ relationship ‘in time’
Don't miss out on the latest news and information.