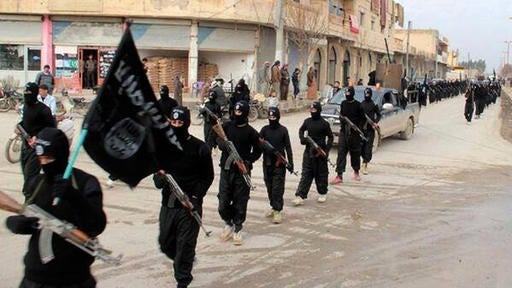 FILE — This undated file image posted on a militant website on Tuesday, Jan. 14, 2014, which has been verified and is consistent with other AP reporting, shows fighters from the al-Qaida linked Islamic State of Iraq and the Levant (ISIL), now called the Islamic State group, marching in Raqqa, Syria. Expelling the Islamic State group from the last territory it held along the Turkey-Syria border has dealt a critical blow to the extremists, cutting their supply lines. That could affect their ability to protect their last bastions the cities of Raqqa in Syria and Mosul in Iraq. (Militant Website via AP, File)

WASHINGTON—Recruits into the Islamic State group are better educated than their average countryman, contrary to popular belief, according to a new World Bank study.

The study, which aimed to identify socioeconomic traits that might explain why some are drawn to the Syria-based extremist group, made clear that poverty and deprivation were not at the root of support for the group.

Almost without exception, fighters joining IS’s Syria and Iraq-based forces had several more years of education in their home countries — whether in Europe, Africa or elsewhere in the Middle East — than the average citizen.

The data shows clearly, the report said, that “poverty is not a driver of radicalization into violent extremism.”

Out of 331 recruits described in a leaked Islamic State database, only 17 percent did not finish high school, while a quarter had university-level educations.

Only those from Eastern Europe were below the average, and only marginally so, according to the study.

“Foreign recruits from the Middle East, North Africa and South and East Asia are significantly more educated than what is typical in their region,” the Bank report said.

About 30 percent of the recruits told the extremist group what positions in the force they wanted. Around one in nine volunteered for suicide operations, and their educational levels were on par with those who sought to be administrators, the report said.

“The proportions of administrators but also of suicide fighters increase with education,” it said.

Most of the 331 recruits also reported having a job before traveling to join the Islamic State group, also known as Daesh, according to the study.

However, it noted that a significant number of those choosing “suicide fighter” as their preferred option when enlisting said that they had not been employed back in their home country, or that they were in the military before joining the group.

“An important finding is that these individuals are far from being uneducated or illiterate. Most claim to have attended secondary school and a large fraction have gone on to study at university,” the report said.

“We find that Daesh did not recruit its foreign workforce among the poor and less educated, but rather the opposite. Instead, the lack of economic inclusion seems to explain the extent of radicalization into violent extremism.”

Read Next
Robredo bats for ‘comprehensive older people’s rights’
EDITORS' PICK
Metro Manila to remain under COVID Alert Level 2 until December 15
Legarda: Ending Violence Against Women, a cause for all
A delightful blessing!
Duterte open to making jabs mandatory; Cabinet mulls ‘pressuring’ the unvaccinated
IATF tightens border control, suspends entry of fully vaxxed nationals from ‘green’ countries
Villar Group gears up for AllValue Shopping Party on Dec. 3; around P 1-million promos and discounts up for grabs
MOST READ
Quiboloy warns of ‘much worse than Omicron virus’ if his ‘persecution’ is not stopped
Bongbong Marcos’ conviction in tax case not a crime involving moral turpitude — lawyer
Marcoleta defends pol ads on ABS-CBN
IATF tightens border control, suspends entry of fully vaxxed travelers from ‘green’ countries
Don't miss out on the latest news and information.