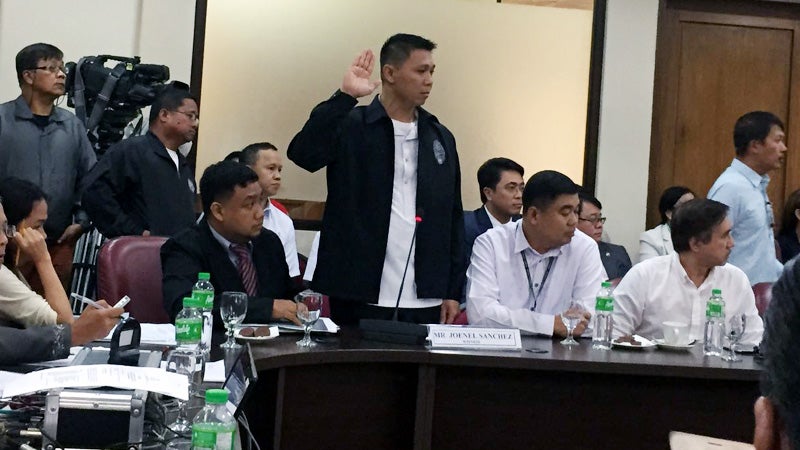 The former security aide of Senator Leila de Lima claimed before the Congressional inquiry on the alleged proliferation of drug trade inside the New Bilibid Prison (NBP) on Thursday that he saw the two sex videos of De Lima and her driver Ronnie Dayan from the phone of Dayan himself sometime in 2012.

Testifying before the House Committee of Justice inquiry on the drug trade in Bilibid, Joenel Sanchez, a member of the Presidential Security Group who once served as a close aide of De Lima from 2010 to 2015, explained in detail the alleged video of De Lima and Dayan.

The existence of the video has been repeatedly denied by the Senator.

Sanchez recalled that in 2012, De Lima’s driver “Bantam” showed to him the videos after Dayan left his phone inside the car parked at the Malacañang compound.

(I was shocked when Bantam showed me the two sex videos  of SOJ De Lima and Ronnie Dayan. The first video shows De Lima posing naked near a shower room, while the other shows SOJ De Lima performing “BJ” on Ronnie Dayan. I felt uneasy with what I saw so I didn’t finish watching it. It just became a running joke among us.)

Earlier in the hearing, Justice Secretary Vitaliano Aguirre II said Sanchez would support allegations that De Lima and her former driver had an affair.

Sanchez said that at the time Dayan headed De Lima’s security team, he noticed the “sweetness” between the two. Eventually, he said he was able to confirm that De Lima and Dayan had a relationship.

He said after duty, Dayan would stay at De Lima’s house. During their out-of-town trips, De Lima and Dayan would sleep in the same room.

(We also frequently go to SOJ De Lima’s house in Bicol and their sweetness is apparent. While traveling to the province, they feed each other.)

In the first quarter of 2015, Sanchez said De Lima and Dayan had a falling out when a certain “Warren Cristobal,” a former Metropolitan Manila Development Authority (MMDA) enforcer, joined De Lima’s security team.

According to Sanchez, De Lima kicked out Dayan from her security team in March 2015 because “they had been fighting about Cristobal.”

(Since then, Warren Cristobal served as the security aide and driver of SOJ. It was also through him that we receive instructions and orders from SOJ. The closeness between Warren Cristobal and SOJ was noticeable so we had speculations that the two had a special relationship.)

In May 2015, Sanchez reported to De Lima after taking a two-month leave. But not long after he returned to work, Sanchez said his father suffered a heart attack.

He said he asked help from De Lima but the latter did not give any assistance. Sanchez then sought help from Associate Commissioner Gilberto Repizo of the Bureau of Immigration, who referred him to the wife of Oriental Mindoro Gov. Alfonso Umali Jr., whose wife is the chief nurse of the Philippine Heart Center.

(SOJ De Lima got mad at me over this, which resulted in my removal as her close-in security.)