CMFR chair: Duterte and his men are the problems, not media | Inquirer News
Close
menu
search

CMFR chair: Duterte and his men are the problems, not media

...but reporters should exercise discretion in choosing what and what not to report
By: Yuji Vincent Gonzales - Reporter / @YGonzalesINQ
INQUIRER.net / 06:24 PM October 05, 2016 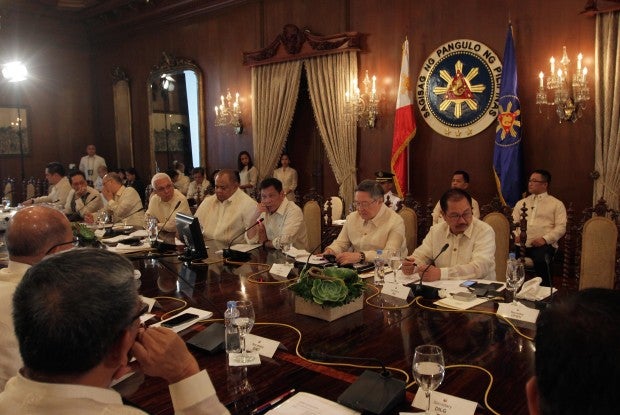 President Rodrigo Duterte meets with his Cabinet. Beside him (at left) is Executive Secretary Salvador Medialdea. (Photo courtesy of the Presidential Photographers Division, PPD)

The chairman of the Center for Media Freedom and Responsibility (CMFR) on Tuesday said President Rodrigo Duterte’s complaints of being misinterpreted or taken out of context for his outlandish statements should not be blamed to the media but to the people around him.

“The media is not in the business of imagining… The problem is his own people don’t seem to understand him,” CMFR chair Vergel Santos said in an interview on ABS-CBN News Channel.

Santos said journalists, who were at the receiving end of attacks from Duterte’s die-hard supporters on social media, were merely reporting what was coming out of the President’s mouth.

But Santos admitted that the media should exercise discretion in choosing what  and what not to report.

“We report what the President says. We don’t have to go to someone else to interpret what he says,” he said.

“It’s not for the media to help them. It’s for them to help themselves. Our business is to report the President, what he says and what he does,” he added.

Santos noted that Duterte himself was the problem, saying that he “cannot stop himself and he does not seem to be open to coaching and counseling.”

Amid international attention that Duterte’s controversial and expletive-laced remarks had been drawing, even his allies in Congress urged him to talk less and just do his job.

Duterte’s remarks that drew parallels with Adolf Hitler’s killing of Jews during the Holocaust and his bloody war on drugs drew a barrage of condemnation from Jewish leaders, foreign governments, international bodies and rights group.

The President’s supporters had repeatedly accused journalists of twisting and making a fuss over his controversial remarks to the extent of badmouthing and threatening them online.

In a statement this week, the National Union of Journalists of the Philippines warned that threatening journalists was criminal, as it reiterated its call on the government to ensure that journalists were protected from attacks. TVJ/ac

President’s supporter has an urgent message for Mr. Duterte