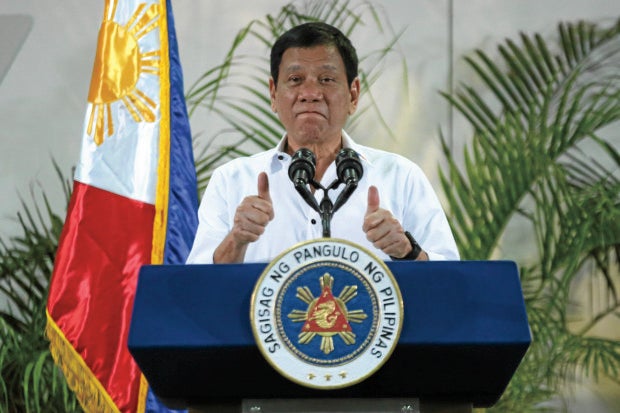 KEEP your mouth shut and open it only after you have learned to talk like a president.

Some of President Duterte’s allies in Congress who had that advice for him on Monday said they expected to be blasted for it, but they aired it just the same because the Philippines needed protection against backlash he regularly drew with his intemperate language.

In the House of Representatives, Majority Leader Rodolfo Fariñas advised Mr. Duterte “not to speak anymore” until he could adjust to refinement required of statesmen.

In the Senate, Sen. Richard Gordon said Mr. Duterte had a duty to be a statesman and he should moderate his language to protect the Philippines against fallout from his outbursts over international criticism of his brutal war on drugs.

On Friday, Mr. Duterte drew swift condemnation from the Jewish community, Israeli and German governments, United Nations, United States and international human rights groups for drawing parallels between his bloody campaign against drugs and the Holocaust.

Noting that Adolf Hitler killed millions of Jews before and during World War II, he said he would be “happy” to slaughter 3 million drug addicts in the Philippines.

A statement from Malacañang on Saturday, attributing the Hitler analogy to Mr. Duterte’s rivals in the May presidential election failed to put out the fire and the President was forced on Sunday to apologize to the Jewish community.

Mr. Duterte, who had been a longtime mayor of Davao City before being elected President in May, had also insulted US President Barack Obama, UN Secretary General Ban Ki-moon and the European Union for expressing concerns about extrajudicial killings in his war on drugs.

He had called them “sons of bitches” and “stupid” and told them not to meddle in his fight against the illegal drug trade, which has cost the lives of more than 3,000 people since he took office on June 30.

The killings had drawn warnings of cancellation of aid to the Philippines and withdrawal of foreign investments, and Mr. Duterte’s profanity-laced outbursts in defense of the killings had brought shame to the country.

Speaking at the resumption of the Senate inquiry into the extrajudicial killings, Gordon noted Mr. Duterte’s tendency to react strongly to criticism, getting himself into trouble.

“I’m a senator. I can say that. I’m a friend, but he can get angry with me and I cannot do anything about it. But we have to protect the country from bad statements and the President has the duty to be a statesman,” he said.

Gordon said Mr. Duterte “must not be heard saying bad words” or the Philippines might as well have a new tourism slogan: “Welcome PI” or “Wow PI.”

“PI” is shorthand for the Filipino expression putang ina, which means “son of a bitch.”

Gordon said he hoped the President heard what he had said.

“Just buckle down to work, which I think would be better,” Fariñas advised Mr. Duterte during a news conference in the House with Speaker Pantaleon Alvarez.

But Fariñas asked the people to cut the President some slack, as Mr. Duterte had yet to adjust from being a mayor who spoke in a certain way to his constituents to being President who must talk like a diplomat.

Fariñas said he could relate to the President, as he had been Laoag City mayor who spoke a bit harsh to local residents to get them to obey laws.

“If you are mayor, you really have to be tough,” he said.

Fariñas said he was sure Mr. Duterte was trying to change. “But he is 71 years old. You cannot change overnight,” he said.

Defending the President, he echoed Mr. Duterte’s recent statement that he ran for President, not for statesman, in May’s national election.

Got his own style

“Of course his primary concern is our internal problems, not our foreign problems. These are illegal drugs, criminality, poverty. Those are our problems. No one can help us solve these problems but ourselves,” Alvarez said.

“Diplomacy is a matter of style of the leader,” he said. “Maybe the other presidents had other styles in diplomacy. He has his own style. Let us respect that.”

“Nothing has happened yet, therefore there is no genocide. That was just a threat,” he said.

“A threat is only a threat. And there is no law prohibiting anyone from threatening,” he said, adding that the President threatened law breakers and not law-abiding citizens.