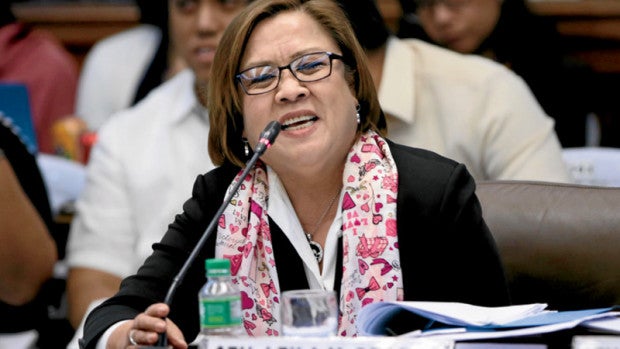 Women’s rights groups banded together in support of Senator Leila de Lima, at the first Buhay at Babae forum at the Commission on Human Rights main office in Quezon City, titled “#EveryWoman: A call to protect human rights and uphold democratic principles.”

The hashtag trended online in the past week as women railed against earlier plans floated by Justice Secretary Vitaliano Aguirre and several congressmen to show an alleged sex video of Senator Leila de Lima as part of the House of Representative’s probe on the illegal-drug trade in the New Bilibid Prison.

De Lima, the keynote speaker at the forum, admitted that in her professional life, this was the first time she had experienced being a “victim.”

“I just never realized that aside from one flaming misogynist, sitting in the highest echelon of power, who thinks rape jokes are actually funny let alone worthy of a President, I would also be working closely with some of them,” De Lima said.

“Women’s issues are trivialized by jokes…by the mentality that it’s okay to make jokes about them, and we are being ‘overly sensitive’ or ‘KJ’ by not finding them appropriate,” De Lima said.

“May iba naman na mas matinik….walang mailabas na credible evidence against me so they consciously use the old ‘sex, drugs and violence’ approach to shield their hypocrisy and incompetence,” De Lima said.

“Apparently, we [women] are good enough for pleasuring our partners, giving birth to our children, taking care of them, but heaven forbid we actually dare to own our sexuality,” the Senator said.

“Babae ako. Hindi ako nahihiya sa akin pagkababae. Wala akong dapat ikahiya sa aking pagkababae. I don’t deserve to be abused. And when I am abused, it is not because I am at fault, not because I deserved it, but because my abusers aren’t intelligent enough to recognize my value, to appreciate me and respect me,” De Lima said.

“The planned presentation and the legislators’ pronouncements in public constitute gender-based violence defined by the CEDAW Committee in General Recommendation No. 19 as ‘acts that inflict physical, mental or sexual harm or suffering, threats of such acts,’” a copy of the complaint read.