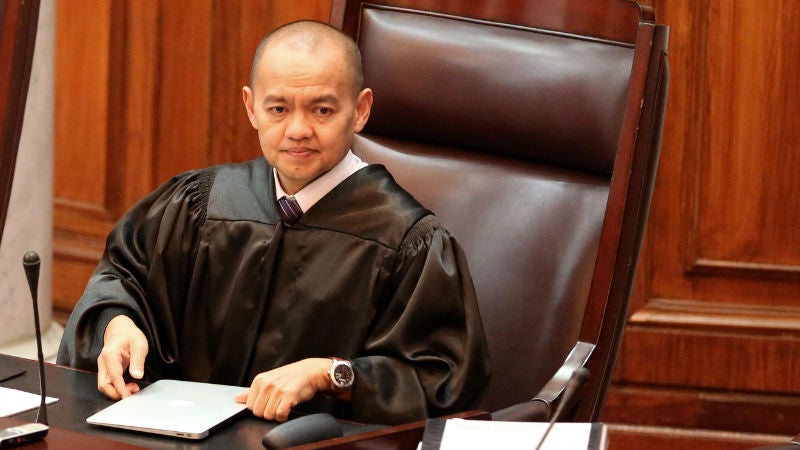 A justice of the Supreme Court took to Twitter on Sunday to air his sentiments on recent contentious issues that have divided the nation.

At 53, Leonen is the only justice on the 15-member court with an active social media account.

“Constitution, art III, sec 1 No person shall be deprived of life, liberty or property without due process of law,” he posted on his Twitter account @marvicleonen.

Leonen’s tweet was in apparent riposte to the spiraling number of killings of suspected pushers, users and drug lords since Mr. Duterte assumed office on June 30.

Police and media have tallied over 3,000 killed in police operations and vigilante killings in just under 100 days of the Duterte administration.

Leonen also tweeted: “Kung hindi tayo kikilos, sino ang kikilos? Kung hindi ngayon, kailan pa? #UP #IskolarngBayan.” (If we do not act, who will act? If not now, when?).

The phrase—the cry of activists during the martial law regime of strongman Ferdinand Marcos—was actually excerpted from an editorial written by student-activist Abraham Sarmiento Jr. in the Philippine Collegian, the student publication of the University of the Philippines.

Leonen, who served as chief government peace negotiator in the talks with the Moro Islamic Liberation Front during the administration of President Benigno S. Aquino III, was appointed to the Supreme Court by the latter in 2012.

And, in an apparent reminder to the legislators who want to show Sen. Leila de Lima’s purported sex video in a House inquiry into the illegal drugs trade, Leonen cited Republic Act No. 9995 or the Anti-Photo and Video Voyeurism Act of 2009.

He also used the hashtags #everywoman #everyman #everyone which De Lima’s supporters have adopted to counter the “slut shaming” being conducted by allies of the President.

Another tweet went: “Constitution, art II, sec 11 ‘The State values the dignity of every human person and guarantees full respect for human rights.’”