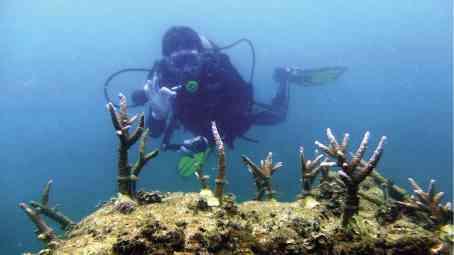 EVERY day at 9 a.m., divers scour the waters off Mayor’s Island in the Hundred Islands National Park (HINP) in Alaminos City in Pangasinan province, to look for fragments of live coral that could still be nurtured at the coral nursery or planted in the sea bed.

They intend to rebuild the coral reefs—colorful gardens under the sea where marine life thrives—which are often damaged by bleaching brought about by global warming.

Bleaching is a slow process, though the damage it causes may seem too quick and sudden for the average observer, said Dr. Edgardo Gomez, professor emeritus of the University of the Philippines Marine Science Institute based in Bolinao town in Pangasinan.

Coral bleaching means these marine animals expel the algae (zooxanthellae) living in their tissues, causing the coral to turn white.

Many of these sea resources are still under threat worldwide, said Gomez, a National Scientist who led the first worldwide assessment on coral reefs.

What the divers are doing is part of the coral regeneration program financed by the Department of Science and Technology (DOST) and the Philippine Council for Agriculture, Aquatic and Natural Resources Research (PCAARD) and implemented by Pangasinan State University and the Alaminos City government.

The coral mass planting was started in 2012, using asexually reproduced corals in different coastal areas of the country, according to Virna Salac, DOST-PCAARD national coordinator of the coral restoration program.

In 2014, the agency rolled out the program to other areas, including the HINP. It contracted PSU and the city government to plant 30,000 fragments.

Rolando Cerezo, PSU director for special projects, said that 20,000 fragments had been planted so far off Mayor’s Island. The remaining 10,000 are slated for planting until December this year.

Salac and Cerezo met last week with Alaminos Mayor Arthur Celeste to discuss the HINP project and its extension through assistance from Pioneer Adhesives Foundation Inc. (Pafi). The selection of project sites includes the willingness of local officials to host the program, Salac said.

The program uses two coral transplantation technologies: One is through coral nurseries where fragments less than 3 centimeters are reared for three months before these are transplanted. The second requires fragments to be attached to substrates (natural stones or materials).

On the seabed, trained divers pick the coral fragments that have been detached from the reefs because of wave action, careless divers and boat anchorage.

“We do not introduce anything that can’t be found in the sea such as artificial reefs; we are replanting dislodged corals,” Salac said. They mainly use Acropora branching species for the coral reef regeneration program.

PSU and the city government maintain 10 coral nurseries (made of steel) in a shallow portion of the HINP, one of which can hold 500 fragments. When they reveal a good survival rate after three months, these fragments are attached to substrates using the commercial epoxy clay aqua. Sometimes they have to be secured by concrete nails.

There is no exact number of hectares where the corals have been replanted, but at least 100 fragments are planted in every 10 by 10 square meter, said Shella Parreno, a research coordinator of PSU-Binmaley.

Though deep in the sea, not all replanted corals survive, as they still face natural challenges, like being overgrown with sargassum (a kind of seagrass) or they could bleach because of hot temperature.

Climate change is a big threat to corals, Salac said, adding that when it gets warm, the corals bleach and die.

The latest massive bleaching occurred in July in Tangdol Reef in Palawan where 90 percent of the reef and 95 percent of the newly transplanted corals were wiped out.

The Palawan experience is caused by El Niño phenomenon which warms the sea water.

The situation at the HINP is better than that of the Palawan coral beds. Only 10-15 percent of corals around the HINP suffered from bleaching, Cerezo said. The HINP still has a 60-65 percent live coral cover.