The Senate took a stand on Tuesday against the House of Representatives’ plan to show the alleged sex video of Senator Leila de Lima by adopting a resolution condemning and opposing it in the “the strongest possible terms.”

All senators present at the Senate session hall unanimously adopted Senate Resolution 184, which was initiated by Senator Risa Hontiveros, chair of the Senate committee on women, and signed by Senators Grace Poe, Cynthia Villar, Nancy Binay and Loren Legarda.

But in Senate Majority Leader Vicente “Tito” Sotto III’s motion, all the senators present at the session hall were later made co-authors of the resolution.

Several  senators, including President Rodrigo Duterte’s allies—Senate President Aquilino “Koko” Pimentel III and Senators Juan Miguel Zubiri and Joseph Victor Ejercito — even stood up on the floor to express their support for the resolution.

“In all sincerity and humility, I wish to express my profound appreciation to my dear colleagues for this gesture. Maraming maraming salamat po sa inyong lahat (Thank you so much, everyone),” an emotional De Lima said after the approval of the resolution.

The resolution said that the showing of the alleged sex scandal would violate Republic Act 9995 or the Anti-Photo or Video Voyeurism Act of 2009 as well as Republic Act No. 4200 or the Anti Wiretapping Law. 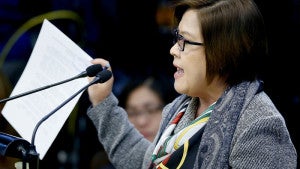 “It also violates the time-honored principle of inter-parliamentary courtesy given that Senator De Lima is a sitting senator and should therefore not be subjected to the ridicule and ignominy of a purported sex video,” it said.

“Most importantly, it is a blow to our collective struggle to uplift the dignity of the woman, respect her agency and her autonomy over her own body, and is a form of slut-shaming that will not set a good example for the country,” the resolution said.

Before this, Hontiveros delivered a speech, lamenting how the so-called “Old Boy’s Club” phenomenon remained “alive and kicking” in the country.

“At its worst and ugliest, this Old Boy’s Club in the Philippines seeks to shame a woman senator into silence by threatening the release of a video purported to capture her in a sexual act,” she said, referring to De Lima.

“Whether you think the video is fake or not is of no moment. What you think of the drug-related allegations leveled against her is of no moment. Isang usapin lang ang inilalatag ko sa inyong harap ngayon (I am laying down just one issue before you): will we allow the House of Representatives to show the sex video allegedly showing Senator Leila de Lima?” Hontiveros asked. RAM/rga

READ: De Lima to House on showing of ‘sex video’: Have you no shame?