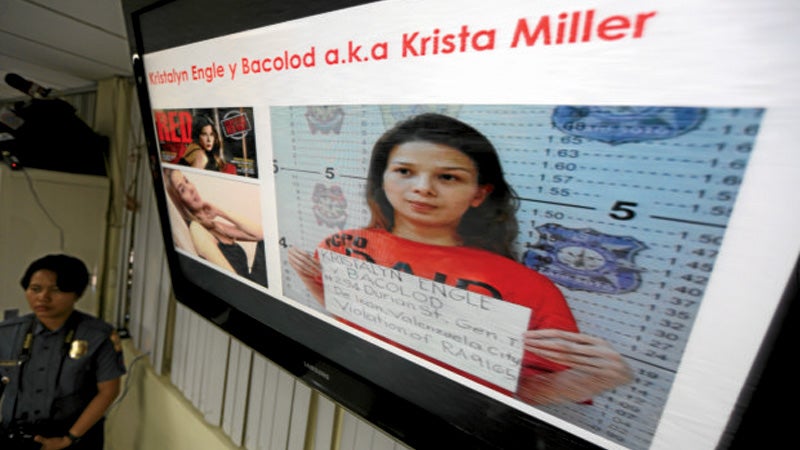 BUSTED Actress Krista Miller is brought to the police station after she was arrested by undercover policemen during a buy-bust operation in Valenzuela City. NIÑO JESUS ORBETA

ACTRESS Krista Miller was arrested in a police buy-bust operation at a gasoline station in Valenzuela City on Friday night after she was identified by two female models for a men’s magazine as their source of “shabu” (methamphetamine hydrochloride).

Miller, 26, whose real name is Kristalyn Engle, and a companion, Aaron Medina, were collared after undercover policemen were able to buy a sachet of shabu for P3,000 from them at the Shell station on General Tiburcio de Leon Street near Santolan Road around 9:10 p.m., said Senior Supt. Guillermo Lorenzo Eleazar, chief of the Quezon City Police District (QCPD).

The two female models—Liaa Alelin Bolla, 24, and Jeramie Padolina, 30—were arrested earlier in the day in a drug bust in a house at 21 A. Luna St., Bagumbahay in Project 4, Quezon City. People in the neighborhood reported to the police that drugs were being sold in the house and customers were flocking there daily.

The lawmen seized from the five suspects seven sachets of shabu, a sachet of marijuana, aluminum foil strips, and an improvised glass tube pipe. Illegal drugs and drug paraphernalia were retrieved from the two models.

Bolla and Padolina pointed to Miller as their source of drugs, while the rest said they got their supply from Ambay Sandigan and his wife, Muhiddin. The couple were arrested on Saturday in Barangay Pinagbuhatan, Pasig City. 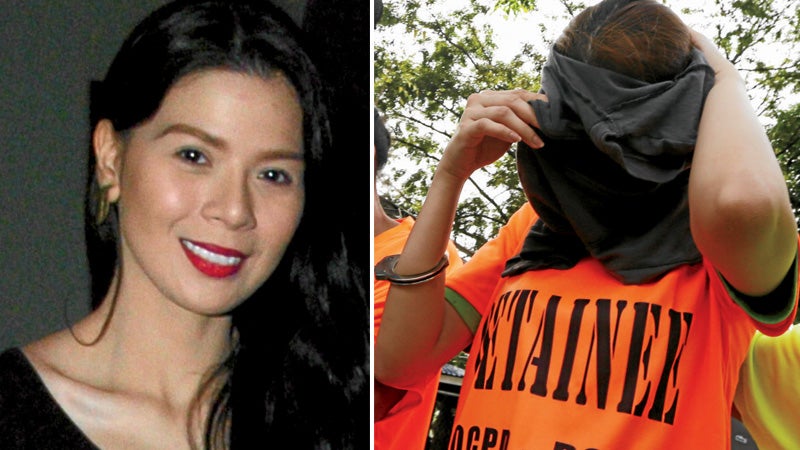 DRUG RAPS Actress Krista Miller, shown in a photo taken in 2014 (left), covers her face (right) as she walks to the police station after her arrest in Valenzuela City. She has been charged with peddling illegal drugs. NIÑO JESUS ORBETA

On Monday, the actress told journalists that she did not want to comment yet on the issue. Bolla, however, confirmed that she would buy shabu from Miller and that she knew her.

“We are looking into how broad her network is,” Eleazar said in a press conference at district police headquarters in Camp Karingal in Quezon City.

Miller has come up with a list of clients, including celebrities, he said.