SPEAKER Pantaleon Alvarez is changing his tune after saying last week he found nothing wrong with the public showing of a sex tape purportedly featuring Sen. Leila de Lima.

On Monday, Alvarez said he was leaving it up to the House of Representatives’ committee on justice to decide if it was necessary to watch the video at a hearing scheduled for Thursday.

At a press conference, the congressional leader acknowledged that “many women’s groups reacted” to his statement about having to show the supposed sex video of De Lima, who is being linked by the Department of Justice (DOJ) to illegal drug trafficking at New Bilibid Prison (NBP) through the testimonies of convicts there.

De Lima, a former justice secretary, is one of the harshest critics of the Duterte administration’s war on drugs that is marred by extrajudicial killings.

Alvarez said he had met with Representatives Kaka Bag-ao of Dinagat Islands, Dina Abad of Batanes and Josephine Sato of Occidental Mindoro to assure them that “I have nothing against women.”

“I am part of the women’s advocacies, the same way that I am one with the LGBT (lesbian, gay, bisexual, transgender) community,” he said.

Alvarez noted that at the time he made his remarks last week that the sex video could be shown at the hearing “there was no objection to it.”

The showing, he added, would violate no law, as “[w]e are doing this in aid of legislation.” 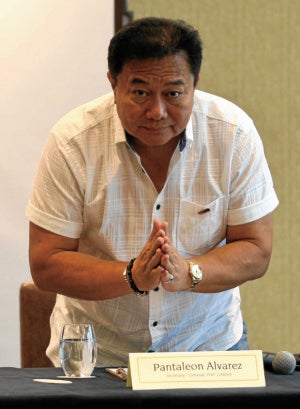 ALVAREZ: We will let the people, the public, judge whether that sex video is true or not. INQUIRER FILE PHOTO

“If Senator De Lima does not want to appear here at the House of Representatives, we will let the people, the public, judge whether that sex video is true or not,” he told reporters then.

The Speaker’s statements triggered a firestorm of protest—from women’s groups to online statements, to female legislators, along with a handful of their male counterparts, signing a statement expressing their objections to the showing of the video.

They said it was immaterial to the congressional investigation aimed at putting together legislation that would stop the illegal drug trade at NBP.

Senators also objected to the plan to show the video at a public hearing.

Senators Panfilo Lacson and Antonio Trillanes IV said it would be “highly inappropriate” and “foul” to show the video.

Sen. Grace Poe said playing the video would violate the Anti-Photo and Video Voyeurism Act of 2009.

But the sex video itself was fake, according to people whom the Inquirer asked to watch a version of the tape purportedly showing De Lima and her former driver, Ronnie Dayan, who is accused of collecting payoffs for her from drug lords inside NBP.

Amid the protests, Alvarez said, “it should be worked out in the committee that this (video showing) should no longer reach my office.”

On Sunday, the House committee on justice chair, Rep. Reynaldo Umali, said that it would be up to the DOJ if it would insist on showing the tape.

Justice Secretary Vitaliano Aguirre II first raised the possibility of showing the video after engaging in a word war with De Lima.

If Aguirre insisted on it, Umali said he would have to call for a division of the House.

Put to a vote

“I do not want to preempt whatever they want to do. In the meantime, we will play it by ear. Whatever happens here and hopefully, people will come to their sense of dignity, sense of decency,” Umali said. The hearing will resume on Oct. 6.

Among those invited by the committee to testify were Dayan, convict Jaybee Sebastian, former Executive Director Reginald Villasanta of the Presidential Anti-Organized Crime Commission, former Director Franklin Bucayu of the Bureau of Corrections, and Presidential Security Group member Joenel Sanchez, a former bodyguard of De Lima.

Alvarez said he had instructed the House justice committee not to recommend the prosecution of anybody from the congressional inquiry.

It should produce, instead, a proposed legislation on how to stop the drug trade at NBP, he said.

The Commission on Human Rights (CHR) described the threat to play the video as a form of “psychological violence” against De Lima and women in general.

“Such repeated threat of showing the alleged sex video shows utter lack of respect for the dignity and privacy of a prominent woman legislator and is clearly meant to shame her,” the CHR said on Monday.

Showing the video, “regardless of its authenticity,” would make those responsible criminally liable, the CHR said. With a report from Dona Z. Pazzibugan