Why divided Colombia said ‘No’ to peace deal 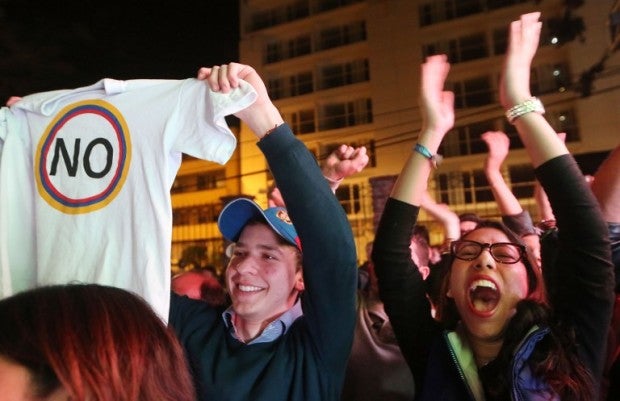 ‘No’ supporters celebrate following their victory in the referendum on a peace accord to end the 52-year-old guerrilla war between the FARC and the state on October 2, 2016 in Bogota, Colombia. The guerrilla war is the longest-running armed conflict in the Americas and has left 220,000 dead. The plan called for a disarmament and re-integration of most of the estimated 7,000 FARC fighters. Colombians have voted to reject the peace deal in a very close vote. AFP

BOGOTA, Colombia — Colombians say they are sick of their country’s 52-year civil war. So why did a thin majority of voters reject their biggest chance yet for peace?

Forecasts ahead of Sunday’s surprise referendum result misjudged how divided Colombians are over how to settle the conflict with the FARC rebels.

“I voted ‘Yes’ to peace by voting ‘No’ to the accord,” said Carlos Gonzalez, a 19-year-old student.

Here are four things Colombians said ‘No’ to.

The accord offered an amnesty for some FARC members, though not for the worst crimes such as massacres, torture and rape.

It offered reduced sentences for some FARC members who confess their crimes.

The FARC apologized to its victims, some of whom met with its members for emotional reconciliations.

But for Monica Gonzalez, 36, the accord was too soft on the FARC, which killed her grandmother in 2011.

“I agree with second chances, but not with impunity,” she said as she celebrated the result in northern Bogota on Sunday night.

The FARC formed in 1964 to fight for control of land and a communist system of government, after state forces crushed a rural uprising.

The peace accord, negotiated in Cuba, aimed to convert the FARC into a civil political group, with temporary seats in Congress.

That was too much for many Colombians, who reject the FARC on ideological as well as moral grounds.

The leader of the ‘No’ camp, former president Alvaro Uribe, said the accord would drive the country towards “Castro-Chavism” — a reference to leftist leaders in Cuba and Venezuela.

“Democracy has been saved” by Sunday’s result, said Jesus Vivas, a 58-year-old pensioner, celebrating on Sunday.

“The future of my family and my children has been saved. We have said ‘No’ to communism.”

Colombia’s President Juan Manuel Santos acted triumphantly when he signed the peace accord with the FARC on September 26. But his approval rating has dipped nearly as low as 20 percent this year.

Opponents said they were in favor of peace but voiced distaste at the president and his determination to be the one to end the war.

“The drive for reconciliation continues, but according to the principles of a healthy society,” said Maria Fernanda Cabal, an outspoken congresswoman.

“Not giving the country away to bandits and the vanity of Santos.”

Turnout in Sunday’s vote was extremely low at 37 percent.

“We do not know what will happen now,” said Jorge Cifuentes, 55, one of the Yes supporters who had gathered to celebrate in Bogota on Sunday night but ended up cast into gloom.

“But it is clear that the conditions granted to the FARC had a big effect, and the low turnout too.” CBB