Speaker Pantaleon Alvarez on Monday said he would author a bill to legalize same-sex union.

In a press briefing, Alvarez said it’s about time to respect the constitutional rights of the lesbian, gay, bisexual and transgender (LGBT) community to be happy.

Alvarez said his proposal would allow LGBT couples legal right to have civil union as recognized by the court.

He said his move was meant to send a message that it’s about time for the Philippines to allow same sex union. 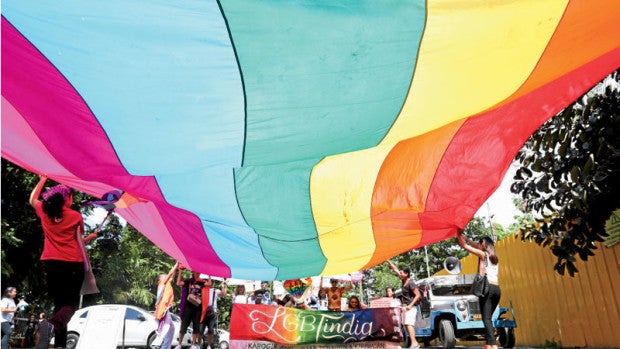 Members of the LGBT participate in a Pride March along Kalaw, in Manila following the deadly shooting in an Orlando gay club in the U.S. which killed 49 people.  INQUIRER FILE PHOTO/ MARIANNE BERMUDEZ

Alvarez said his proposal would amend the Family Code, which limits union between man and woman.

Alvarez clarified that his proposal would legalize same sex union, noting that marriage should be left to the mandate of the Catholic Church.

He said he does not mind if the Catholic Church or deeply religious lawmakers would oppose the bill, noting that it’s part of democracy.

Alvarez said in the end, democracy is about the rule of the majority.

“Kaya nga tayo demokrasya. mayroon talagang opposition. Wala namang walang opposition. But the beauty of democracy is we can argue, we can disagree, but at the end of the day, it’s still the majority that prevails,” Alvarez said.

In the 16th Congress, then Speaker Feliciano Belmonte Jr. said it would be impossible for Congress to legalize same sex marriage in the country with its deep Catholic roots.

In 2015, openly gay lawyer Jesus Falcis III asked the Supreme Court to abolish the prohibition on same sex marriage in the Family Code.

The Office of the Solicitor General under the previous administration of erstwhile president Benigno Aquino III opposed the petition it dismissed as “intrinsically flawed.”

Read Next
Sexy actress Krista Miller nabbed in drug operation
EDITORS' PICK
In Borongan, nuns play hoops (not mahjong)
House energy committee chair Arroyo bats for cheap electricity
A laptop that maximizes your WiFi so you can maximize your productivity
Why Tagle is a leading papal contender
Powered by style, innovation and passion
KWF has no power to ban, censor written works – Lagman
MOST READ
Zubiri on SRA mess: Shameful, disgusting
Why Tagle is a leading papal contender
Arjo Atayde reveals proposal to Maine Mendoza was ‘more than a year’ in the making
My neighbor FVR: From soldier to president
Don't miss out on the latest news and information.