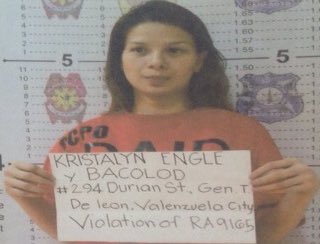 Sexy actress Krista Miller, who was earlier linked to a controversy involving a convicted drug lord detained at the New Bilibid Prisons (NBP), was nabbed in a buy-bust operation last Friday.

Later, QCPD members acted on a tip and conducted a follow-up buy-bust operation that led to the arrest of Miller and her companion Aaron Medina, both 26, Brgy. Gen. Tiburcio de Leon in Valenzuela City.

Miller was the “starlet” who visited convicted drug lord Ricardo “Chacha” Camata in a hospital outside Bilibid.

INQUIRER.net earlier reported that Camata, commander of the notorious Sigue-Sigue Sputnik Gang, brought in a “starlet and TV dancers” inside his hospital room at the Metropolitan Medical Center in Manila where he was rushed last May 28 due to a lung ailment.

Baraan said the convict met Miller inside prison during Bilibid’s Flower Festival event in May 2014, where the starlet was invited as guest.

Camata’s hospitalization and other supposed perks drew the attention of the DOJ, prompting the agency to investigate NBP officials and prison guards. CBB/rga