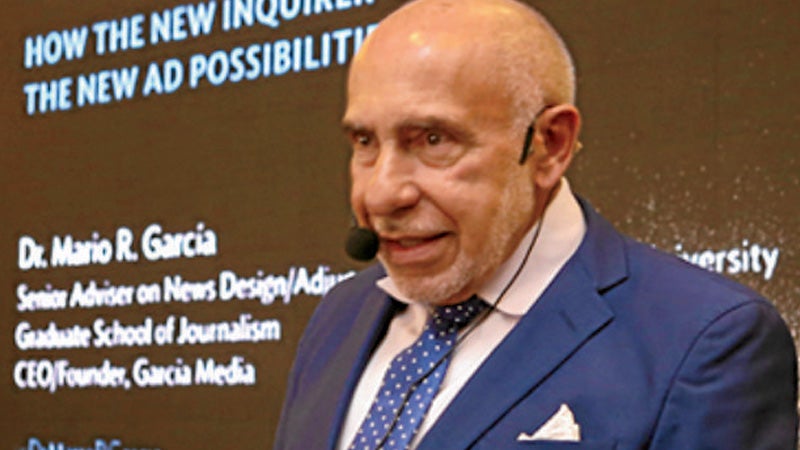 GARCIA: Change has the scent that seduces.    INQUIRER PHOTO

“CHANGE can make you feel young.”

Far from being just his life philosophy, the magic of change is what Mario Garcia brandishes when invited to newsrooms around the world.

The New York-based Garcia, CEO and founder of Garcia Media, is regarded as the rock star of newspaper design and strategy.

Garcia, 69,  has led the transformation of more than 700 newspapers and media brands in 120 countries and on six continents over 42 years.

His major projects are a roll call of who’s who of news brands, including The Washington Post, The Wall Street Journal and Norway’s Aftenposten.

He travels frequently across the globe, bringing his bag of tricks to make newspapers tick and shine in an age when readers tend to get their news from desktops, tablets, smartphones and smartwatches.

“To me, change has the scent that seduces,” Garcia said in a recent blog.

“I try to wear that scent when I face editors, publishers, designers, professors, students, family and friends. It is the scent of the positive, the optimistic,” he added.

That scent was certainly felt when he first entered the Inquirer newsroom in April last year. He assured editors that he respected the newsroom culture and traditions whenever he was undertaking a redesign of a news brand.

“Tell me about your teddy bears,” Garcia told the editors of the newspaper, who regarded him with a mixed sense of awe and trepidation.

After studying Inquirer issues for weeks from his New York base, Garcia came to the newspaper to give his verdict.

If he hurt some egos in the newspaper with a proud history, Garcia was authoritative and animated in visualizing a wonderful transformation of the Inquirer and all its platforms for today’s readers.

He assured the editors that a newspaper could have great design but its success depended on its content.

“Many well-designed newspapers have ceased to exist, while many not-so-beautiful newspapers continue to thrive. Why? Because the content has been essential to the lives of its readers,” Garcia said in an interview for this article.

“My background and training are those of a journalist. So in each project I have emphasized the importance of the good story, with design there to package it and to make it more accessible,” he said.

Garcia said newspapers continued to thrive and remained a formidable force in what he called the media quintet—print, desktop, tablet, smartphone and smartwatch—or the platforms where readers access their news.

“Technology forces changes, not just in how we produce our publications, but also how the audience consumes it. Therefore, there is a need for continued efforts to rethink the operation, to search for ways to do better storytelling and more appealing visual presentation,” he said.

But his projects were not just about the aesthetics but about moving newspapers to the next level of excellence.

“I take pride in the fact that each of these projects began with the notion that design exists to package the content, which is what readers come to a newspaper for,” he told the Inquirer.

Minnesota’s The St. Cloud Daily Times had the “courage to change its nameplate, its brand and logo.”

The Philadelphia Inquirer was all about its Pulitzer Prize-winning journalism, for which Garcia used its story structures to make its new design.

Garcia’s all-time favorite project, for being the “most revolutionary,” was the total reinvention of Colombia’s El Tiempo, The six-section newspaper was rethought into three—what you must know, what you must read and what you must do.

He has written 11 books on design and storytelling, and has received more than 300 awards from the prestigious Society for News Design, including the Lifetime Achievement Award.

At Columbia University, Garcia teaches multiplatform design and storytelling. He has been awarded the Missouri School of Journalism’s Medal of Honor for Distinguished Service in Journalism and the Columbia Scholastic Press Association’s Charles O’Malley Excellence in Teaching Award.

He has been a distinguished professor at University of Navarra in Spain and a lecturer in universities in 25 countries.

With tenacity and industriousness he still imbibes today, Garcia succeeded as a student, actor, journalist, professor, author, family man in his adopted country, the United States. He was recognized by People Magazine en Español as among the 100 Most Influential Hispanics.

For all these accomplishments, Garcia has been asked: when will he ever retire?

“I have no idea,”’ he said. “But I know deep inside that I will know exactly when to retire: the day that I wake up without the passion in my belly. A passion for life. A passion for this wonderful craft of ours. A passion for dispensing teddy bears of change along the way. But one cannot simply dispense change without believing in it. I do.” TVJ