In a 4-peat, Mayol of Cebu Daily News gets top award 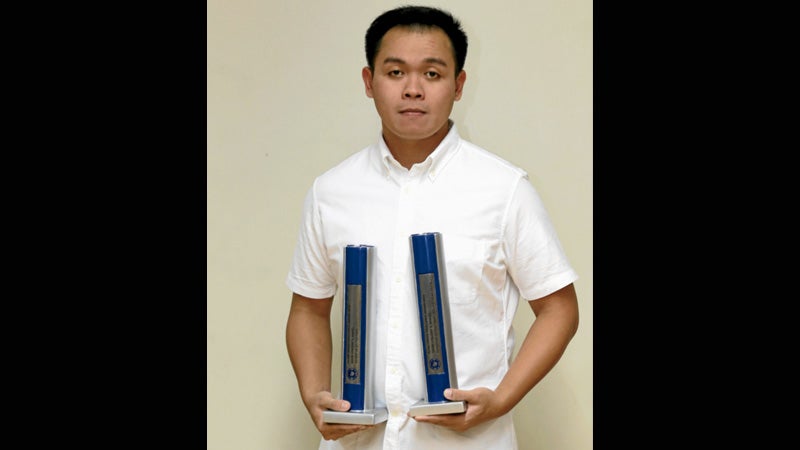 GOD’S WORK Ador Mayol, a senior reporter of the Cebu Daily News, attributes to God’s work his winning the Reporter of the Year for Print award for the fourth consecutive year. CONTRIBUTED PHOTO

Ador Mayol was named Reporter of the Year for Print during the prestigious Globe Media Excellence Awards (GMEA) on Sept. 29—a category he won for the fourth consecutive year.

CDN photographer Ferdinand Edralin was named Photojournalist of the Year for his photo of a dried-up dam, which was published on April 9.

CDN chief photographer Tonee Despojo was a finalist in this category.

GMEA was launched in Cebu and Davao cities in 2012 as part of Globe’s advocacy in supporting press freedom by honoring media practitioners, who demonstrate excellence and professionalism in their field of work.

This year’s GMEA winners came from 789 entries submitted from all over the Visayas.

The awarding ceremonies were held during Press Freedom Week in Cebu City, the only one of its kind in the country in which media practitioners come together to reaffirm media responsibility and promote press freedom.

The weeklong celebration is held in the week that includes Sept. 21, the anniversary of the declaration of martial law.

For winning the Reporter of the Year for Print award, Mayol was recognized for his story, “Wrinkled Hopes,” which saw print on April 16. The article spoke about the lives of abandoned elderly left in the care of homes and strangers.

The two other finalists for the category were Inquirer reporters Nestor Burgos Jr. and Joey Gabieta.

As Best Reporter for Online News Portal, Mayol was recognized for a CDN story titled “Shining Through The Haze,” a narrative on the plight of persons with mental disability. It was published on April 24.

READ: Shining through the haze

CDN reporter Jose Santino Bunachita was also among the three finalists in that category.

Mayol, a quiet, unassuming senior reporter of CDN, has a talent for great prose, an eye for a good story and a patience for details.

He made it a point that every year he would write stories that would bring attention to the plight of the marginalized in hopes that their lives would change for the better.

Among these stories was the need to bring care and love to the abandoned elderly and people with mental illnesses.

“I share the hope of these people who, in the sight of some individuals might be of lesser value, but are precious in the eyes of God,” Mayol said.

“In dealing with them, we too open our hearts to Jesus. Through their stories, I hope to awaken everyone to the necessity of creating a more humane civilization,” he added.

The story about the elderly turned out to be a winning piece.

For Mayol, winning awards would not make him a better journalist since accolades would be forgotten one day.

“[It] … doesn’t make one better than the rest. Like the other journalists, I, too, must work hard to improve every day, not only for myself, but for everyone who thirsts for the truth,” he said.

“It was nothing but God’s work. I live by God’s mercy and CDN won by the mercy of God,” he added.

The Explanatory Story of the Year for Print was awarded to Sun.Star Cebu’s “Breaking Child Labor,” written by Cherry Ann Lim.

The Explanatory Story of the Year for TV award was given to “Krisis sa Tubig” of GMA’s Alan Domingo.

The Public Affairs Story of the Year award was won by Ruphil F. Bañoc of DyHP RMN Cebu, for “Basura Bayloan og Grocery/Recycling of Waste Materials.”

Christian Vincent Literatus of Bisdak Explorer won the Blogger of the Year award for “Bisdak Explorer’s Top 10 Free Travel Apps for Your Next Adventure.”

Joyce Torrefranca was chosen Social Media Advocate of the Year for “I Got Inspired by a Kid: Daniel Cabrera.”