Fear and faith for daughters of Pakistani Christian on death row 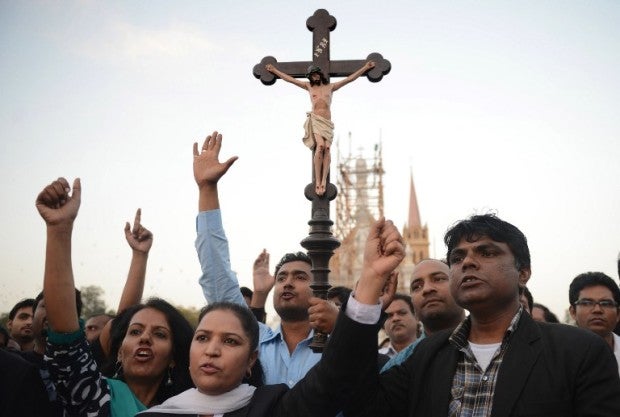 Pakistani Christians shout slogans during a protest against the attack on the homes of members of the Christian community by Muslim demonstrators, in Karachi on March 9, 2013. AFP FILE

LAHORE, Pakistan — Esham and her sister Esha live largely in seclusion: fears they will be mistreated because they are daughters of the accused in Pakistan’s most infamous blasphemy case make them reluctant to venture into the brimming streets of Lahore.

Their mother, Asia Bibi, has been on death row for six years in a case some have called a battle for Pakistan’s soul as the state walks a razor-sharp line between upholding human rights and appeasing populist hardliners.

The family have new hope of a reprieve — the Supreme Court has said it will hear an appeal for Bibi later this month.

Their fight has reached all the way to the Vatican, where Esham found herself face to face with Pope Francis in April last year as the head of Catholic church offered prayers for her mother.

“He gave me blessings and I can’t remember more,” the 18-year-old told AFP.

“I feel the Pope is praying for my mother and he will keep praying, and with his prayers my mother will be freed.”

The allegations against Bibi date back to June 2009, when she was laboring in a field and a row broke out with some Muslim women she was working with.

She was asked to fetch water, but the Muslim women objected, saying that as a non-Muslim she was unfit to touch the water bowl.

The women went to a local cleric and accused Bibi of blasphemy against the Prophet Mohammed, a charge punishable by death under legislation that rights groups say is routinely abused to settle personal vendettas.

Blasphemy is a hugely sensitive issue in deeply conservative, Muslim-majority Pakistan. Anyone even accused of insulting Islam risks a violent and bloody death at the hands of vigilantes.

Bibi was convicted and sentenced to hang in 2010, despite her advocates maintaining her innocence and insisting the argument was a personal dispute.

The next year liberal provincial governor Salmaan Taseer, who spoke out in support of Bibi, was gunned down in broad daylight in Islamabad.

The state hung his assassin Mumtaz Qadri earlier in 2016 in a Supreme Court decision that was hailed by progressives, but brought hardliners into the streets supporting Qadri and demanding Bibi hang.

Security forces braced for violence which never erupted. But Qadri’s execution in March shrank the already narrow boundaries of Esham and Esha’s world.

“Papa used to tell me not to go out, the situation out there is very bad,” Esham says of the days after the hanging. “We used to stay inside all the time.”

She is afraid, she says. “Someday someone will come and ask me, are you the daughter of Asia Bibi?”

Esham and Esha travel twice a month to the south Punjab city of Multan, where their mother is held.

“We talk to our mama about the things at home,” Esham says. “I share my thoughts with her, like mother-daughter stuff.”

The visits begin joyfully, she says, but end each time with a new wrenching moment of grief. “She becomes sad… her daughters come to meet her from such a long distance and she cannot even hug them.”

Esham and 17-year-old Esha, who is mentally and physically disabled, live with their father for now but for some time stayed with a caretaker, buried in Lahore’s maze of streets away from their family due to safety fears.

According to a tally by Human Rights Watch, 17 people including Bibi remain on death row, though Pakistan has not yet executed anyone on the charge.

In 2010, Pope Francis’s predecessor Benedict XVI called for Bibi’s release, and her husband has written to Pakistani President Mamnoon Hussain to seek permission to move her to France.

But the years of separation from her daughters have ground on, her appeals rejected by successive courts until last year, when the Supreme Court agreed to consider her case.

Months of inertia passed before it finally announced it would hold the appeal in the second week of October, Bibi’s lawyer Saif-ul-Mulook told AFP. The exact date has yet to be confirmed.

“There is no question that what is at stake is the very soul of the state and Pakistan society: does Pakistan respect the rights of the most vulnerable? Does it defend those rights against spurious allegations even where those allegations involved matters that are sacred to most Pakistanis?” Mustafa Qadri, an expert on human rights in South Asia, told AFP.

No matter the outcome, the blasphemy laws will continue to undermine human rights in Pakistan, he says.

But a decision in Bibi’s favour “would send a powerful message to the world that Pakistan respects the rule of law and not the mob.”

Hardliners, already bruised by the decision to hang the Islamist assassin Qadri, “would without question react angrily and likely violently” to such a decision, he warned.

Qadri is regularly hailed as a hero by clerics at Friday sermons, with a shrine recently erected in his honour in the outskirts of Islamabad. At a mosque in the capital recently, thousands heard a cleric’s call for Bibi to hang.

But, several hundred kilometres away in Lahore, Esham and Esha continue to hope.

Esham clears her throat and speaks quietly. “My mom will be released,” she says. “I ask you to pray for her.” CBB