Colombian rebels confirm they will pay reparations to victims 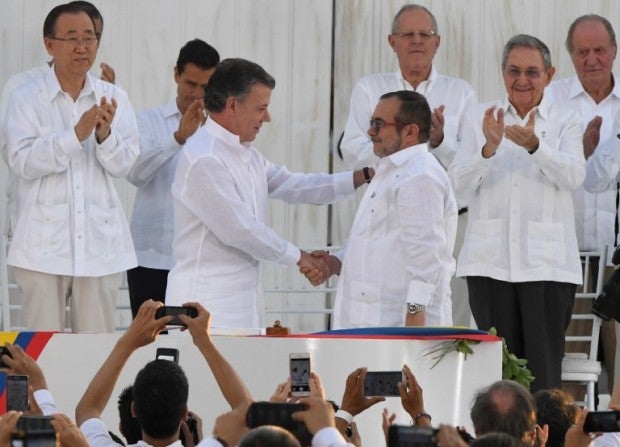 Colombian President Juan Manuel Santos (left) and the head of the FARC guerrilla Timoleon Jimenez, aka Timochenko, shake hands during the signing of the historic peace agreement between the Colombian government and the Revolutionary Armed Forces of Colombia (FARC), in Cartagena, Colombia, on September 26, 2016. Colombia turned the page on a half-century conflict that has stained its modern history with blood when the FARC rebels and the government signed a peace deal. AFP

BOGOTA, Colombia — Colombia’s FARC rebels said Saturday they would pay reparations to victims of the country’s long war as per a recent peace accord.

Until now, the guerrillas had said they did not have money to pay damages because everything went to their war effort.

And critics of the peace accord, signed Monday by the leftist rebels and the government after nearly four years of negotiations, have argued that the guerrillas would not pay damages even if they had funds to do so.

The Colombian people will vote on the accord Sunday in a referendum.

In a statement, the FARC said that in line with the terms of the peace agreement “we will pay material reparations to victims.”

The FARC said they would report to the government “the monetary and non-monetary resources” that have funded their war effort.

Those assets will be reported during the 180 days the rebels have to disarm.

The accord will effectively end what is seen as the last major armed conflict in the Americas. The war has killed hundreds of thousands of people and displaced millions.

It calls for the rebels to disarm after the plebiscite and convert into a political group.

The FARC launched its guerrilla war on the Colombian government in 1964, after an uprising by farmers demanding land was crushed by the army.

Over the decades, the ideological and territorial conflict drew in several leftist rebel groups, right-wing paramilitaries and drug gangs.