Despite lashing from Duterte, EU gives funds for drug rehab in PH 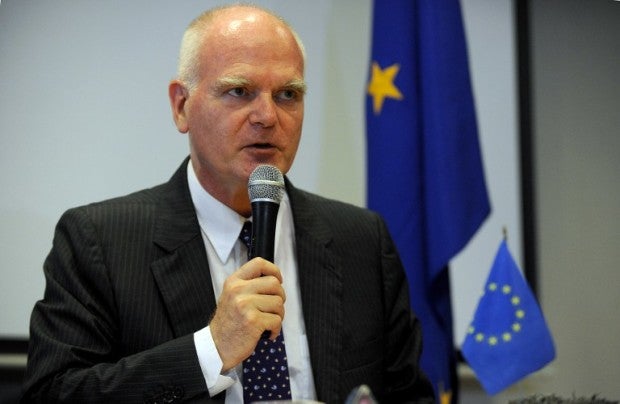 Despite the relentless swearing of President Rodrigo Duterte at the European Union (EU) for its criticism of the rising summary killings, the 28-member bloc says it has a fund assistance program to support the rehabilitation of drug addicts in the country.

EU Ambassador to the Philippines Franz Jessen raised concern that the EU had been put in a bad light and “continued to draw headlines during the past week.”

The foul-mouthed Duterte had been cursing the EU following the release of its five-page resolution raising concern over the high number of drug suspects killed by police and vigilantes in the Philippines since the President launched a crackdown on the illegal trade upon taking office on June 30.

In dealing with harsh criticisms, Jessen said he had been keeping himself busy reading “Dusk (Po-On)” by National Artist F. Sionil Jose.

“I was impressed seeing that his mother showed him the value of reading despite the hardship they lived in. Values are what bring societies forward, and reading enriches life,” said Jessen’s letter posted on the EU website.

He said “Dusk” is a historical novel describing the late 19th century. “Not only am I learning about the colonial times and problems, but I am also getting to know Pangasinan much better.”

Despite Duterte’s criticism, Jessen said EU continues to widen its support for programs in the Philippines.

“We are supporting the Philippines on many different fronts,” said Jessen in an open letter posted on EU website on Friday.

EU fund assistance to the Philippines reaches P3 billion annually, according to Jessen, with the bulk of the amount going to the health sector.

At the same time, he said the EU remains committed to assisting the Philippines in achieving peace and security in Mindanao.

Jessen said he met with Presidential Adviser on the Peace Process Jesus Dureza to strengthen EU-Philippines cooperation in implementing the peace agreement in Mindanao.

“When we support, we do so in an open and transparent manner, emphasizing, of course, the basic values and objectives of the EU, be it fighting climate change, reducing poverty, improving the situation of women or human rights,” said Jessen.

He also announced the visit of a delegation of about 300 European businessmen to the Philippines to attend the EU-Philippines business summit.

Jessen said EU remains a key player in global trade with 25 percent of the world’s GDP.

“The EU is big, more than 500 million people, with a per capita income of 35.000 USD. The EU is colossal in economic terms,” he said, adding that the scope for economic interaction between a developing Philippines and a mature EU is large. He said such potential will be unleashed at the business summit this week.

The fund assistance to establish rehabilitation facilities for drug addicts is part of the implementation of the EU resolution to widen assistance to Philippines in dealing with the drug problems.

Read Next
NPA in Mindanao still extorting, kidnapping despite ceasefire–Army
EDITORS' PICK
Acer starts the year off strong with the Aspire Vero National Geographic Edition
4.7 million Filipinos have received booster shots, but that’s still a ‘low’ number – Galvez
Over 3 Million worth of prizes to be won at Smart Padala’s SENDali Manalo Promo!
‘Not yet the end’: Lawyer says Marcos Jr’s DQ cases to take lengthy process
Omicron now shows up in 90% of samples sequenced – Duque
The best of bayside and city living at SMDC’s Sail Residences
MOST READ
When to get boosters after positive COVID test
Duterte asks: ‘Is COVID-19 airborne?’ Duque blames spread on ‘token compliance’ with rules
In Batanes, octogenarian dies of COVID-19
Drug lord Espinosa tried to escape through air vent at detention facility – NBI
Don't miss out on the latest news and information.