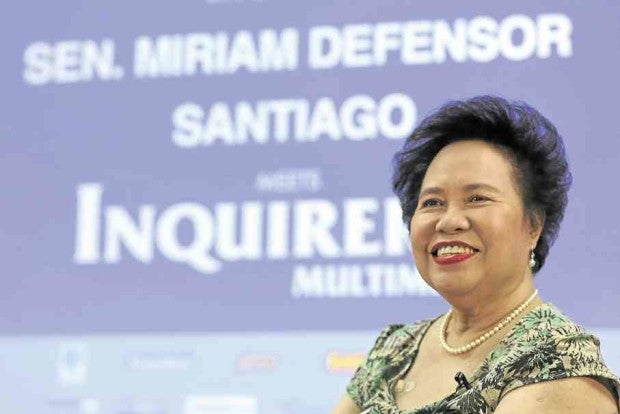 THEN Sen. Miriam Defensor Santiago makes one of her last public appearances at the INQUIRER in May. INQUIRER PHOTO

Former Sen. Miriam Defensor Santiago, who as commissioner cleaned up the corruption-ridden immigration bureau and battled Yakuza criminal gangs, earning for her the Asian version of the Nobel Prize and the adulation of a grateful nation that voted her to the Senate three times but thrice rejected her as possibly the best President the country never had, died on Thursday. She was 71.

The senator’s death, after a two-year bout with lung cancer, was announced by her husband, Narciso Santiago.

“I accept this. I do not want to do anything heroic,” the husband quoted Santiago as saying before she succumbed in her final battle against the Big C that hobbled her last campaign for the presidency in May. She had been unconscious for several days before that.

“She died peacefully in her sleep. That is all I want to remember,” he said.

The remains will be moved to Immaculate Concepcion Cathedral in Cubao, Quezon City.

At the Meet Inquirer Multimedia forum on May 3, Santiago appeared in top form, a far cry from her distracted demeanor and subdued sound bites during the campaign. She said she had been in remission. “It means the cancer cells, which are normally repugnant because they eat everybody around them,” she began, before putting in: “Some people are like cancer cells.”

The senator recalled how the initial cancer treatment drained her to a point she thought about giving up her candidacy. “I knew I can afford it at the initial stages, but it will leave me broke and dying anyway. So I said (to the Lord), take me now,” she said, gripping the bottom of her chair and looking up.

Had she won, Santiago said she would have run the country “like a strict mother,” who placed a premium on discipline, the civic spirit and nationhood. She quipped “Wala (nobody)!” when asked who among the other presidential candidates was best qualified for the job.

“[The next President] should have academic excellence, professional excellence and moral excellence or no record of corruption,” Santiago said in February.

As immigration commissioner, Santiago ordered the arrest and deportation of criminal syndicates, including those engaged in illegally procuring infants for adoption in Europe and those procuring “mail-order brides” and “entertainers” for prostitution abroad.

“I eat death threats for breakfast,” she once famously said, earning her a reputation as a tough, no-nonsense official battling the Japanese Yakuza gangsters.

As a lawmaker, she  filed the highest number of bills and authored some of the most important laws. Her most important pending bills included the antidynasty bill; an act institutionalizing an age-appropriate curriculum to prevent the abduction, exploitation and sexual abuse of children; freedom of information bill; and Magna Carta for Philippine internet freedom.

In December 2011, Santiago was the first Filipino and Asian from a developing state to be elected judge to the International Criminal Court for a nine-year term. In June 2014, however, she waived the privilege after she was diagnosed with cancer.

Claiming that she had “licked” cancer, Santiago ran for President in May 2016 under the People’s Reform Party. She ran and lost in 1992 and in 1998.

“I won in the voting but lost in the counting,” Santiago recalled when she finished a very close second to President Fidel Ramos 24 years ago. Ramos garnered 5.34 million votes while she collected 4.47 million—a difference of less than a million.

In 2005, she relaunched her best-selling book, “Stupid is Forevermore,” a sequel to “Stupid is Forever.” The books are compilations of her witty one-liners on a range of topics, including politics, religion, morality and romance.

Commenting on her appeal to the youth, Santiago said: “I think that they like the idea that there is a person who prefers to stand against the tide if that is dictated by the rule of law.”

Among the citations she received include one of “The 100 Most Powerful Women in the World” by The Australian magazine in 1996; Ramon Magsaysay Award for Government Service in 1988 “for bold and moral leadership in cleaning up a graft-ridden government agency.”

Santiago was born on June 15, 1945, in Iloilo City to Benjamin Defensor, a presiding judge at a regional trial court, and Dimpna Palma, a college dean.

She was married to Narciso Santiago Jr. and had two sons, Narciso III and Alexander (deceased).