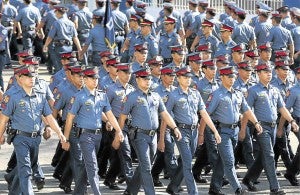 CAGAYAN DE ORO CITY – Three ranking officers of the Northern Mindanao police were relieved of their duties due to “poor performance in the campaign against illegal drugs,” the police regional command announced on Thursday.

Supt. Danildo Tumanda is now the new RPSB head. He delegated his position as chief of Regional Investigation and Detective Management Division to Supt. Marilou Tambis as officer in charge.

“This is an offshoot of several overarching reasons that include unsatisfactory performance in the anti-illegal drugs campaign, overstaying and notwithstanding their own personal reasons like their desire for a well-balanced career assignments in both staff and command positions, assignments outside the region, job competency alignment and the unpreventable compulsory retirement,” Sereñas said.

Two weeks ago, 12 chiefs of police in Northern Mindanao were also sacked for unsatisfactory performance in connection with the anti-drug campaign.  SFM