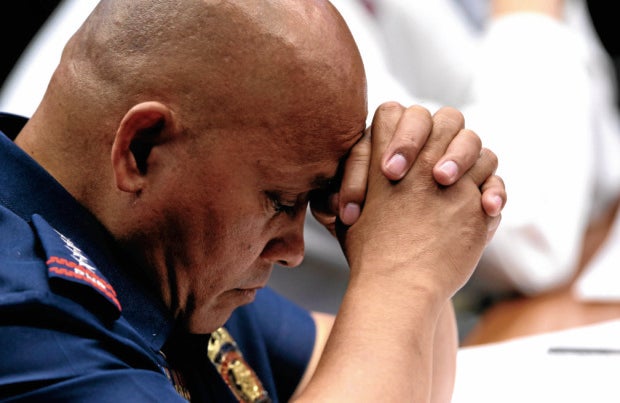 PNP Chief Ronald Dela Rosa during the hearing of Committee on Justice and Human Rights at the Senate in Pasay City on alleged extra judicial killings amid the government campaign against illegal drugs.INQUIRER PHOTO / RICHARD A. REYES

The state of national emergency should remain in force amid the government’s relentless war on illegal drugs, the official of the Philippine National Poice (PNP) has said.

“As of now I cannot give advice to the President na i-lift ‘yung (to lift the) state of lawlessness na sinasabi niya (he was talking about),” PNP chief Director General Ronald Dela Rosa told reporters in a press briefing on Thursday when asked if Duterte should lift the declaration.

Duterte signed the proclamation two days after a deadly bombing in a crowded night market in Davao City, which killed 15 people and injured dozens more.

Malacañang has said that the declaration would be “indefinite” as long as the President finds it necessary.

As of September 29, records from the PNP showed that 725,791 drug users and pushers have surrendered to police while 19,907 drug personalities were arrested. The PNP added that 1,276 people have been killed in police operations against illegal drugs.

Dela Rosa said the war on illegal drugs of the PNP was now in its second phase.

“Second phase will be focusing more (on) the HVTs (high value targets). ‘Yung…bale ang focus ‘nong first phase ay doon sa Tokhang sa street level (The focus of the first phase was on the Tokhang in the street level),” he said.

The police official admitted that the government was still halfway to its target number of “drug surrenderers.”

“Malaki pa ang kulang talaga (We have yet to fulfill our target),” he said, adding that their target was 1.8 million surrenderers.

Dela Rosa said supply of illegal drugs was down by 70 percent to 80 percent.

Read Next
Alvarez says De Lima’s mouth almost cost Sebastian his life
EDITORS' PICK
EDITORIAL: To a bike-friendly future
The Best Tech Gifts For The 2022 Holidays
Is it safe to talk politics again at family gatherings? ‘The Reconciliation Dinner’ shows us what that’s like
House energy committee chair Arroyo bats for cheap electricity
vivo’s coming to town to grant wishes with more holiday promos
Pagasa: Warm, sunny Sunday in most parts of PH
MOST READ
LOOK: Vhong Navarro transferred to BJMP detention facility in Taguig
The Elephant Man in the Senate
Posh village as ‘shabu’ haven
LOOK: Zanjoe Marudo bonds with Ria Atayde, her family
Don't miss out on the latest news and information.