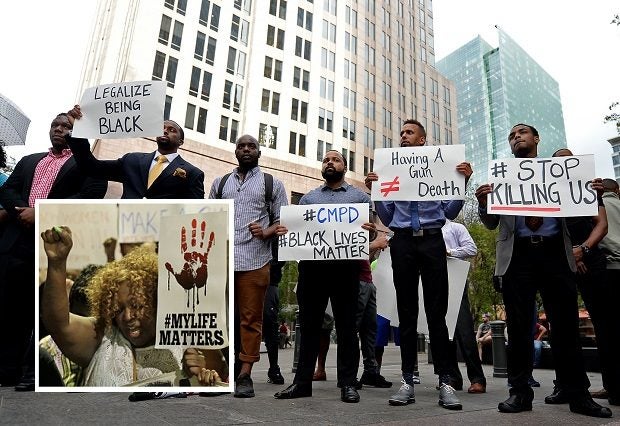 People gather at Trade and Tryon Streets in uptown Charlotte, North Carolina, in protest of a police officer’s fatal shooting Tuesday of Keith Lamont Scott, Wednesday afternoon, Sept. 21, 2016. Scott was shot at The Village at College Downs apartment complex in the University City area. Authorities in Charlotte tried to quell public anger Wednesday after a police officer shot a black man, but a dusk prayer vigil turned into a second night of violence, with police firing tear gas at angry protesters and a man being critically wounded by gunfire. AP

CHARLOTTE, North Carolina, United States — Charlotte police released dramatic video footage Saturday that shows officers surrounding a black man with his hands at his side before shots are fired and he buckles to the ground.

Keith Lamont Scott can be seen in police dashboard camera video backing away from his SUV with his hands down, and it’s unclear if there’s anything in the man’s hands. Four shots are heard, and he falls to the ground.

The footage was released after several days of demonstrations that have coalesced around demands that the public see the video.

READ: ‘Why are you Americans killing the black people…?’ – Duterte | US killings a concern, too–Duterte

Videos from the dashboard camera and the body camera also show the sequence of events leading up to the shooting.

The dashboard camera footage starts with two officers pointing their guns at Scott, who is inside the SUV with the doors closed and windows rolled up. Scott gets out and starts walking backward before shots are fired.

Police also released photos showing what they say showed a handgun and marijuana that were in Scott’s possession.

Before releasing the footage, Chief Kerr Putney said at a news conference that he received assurances from the State Bureau of Investigation that letting the public see the video would not impact their independent probe of the shooting.

Asked whether he expected the footage to calm protesters, Putney responded: “The footage itself will not create in anyone’s mind absolute certainty as to what this case represents and what the outcome should be. The footage only supports all of the other information” such as physical evidence and statements from witnesses and officers.

At his news conference, Putney said that his officers didn’t break the law but noted that the State Bureau of Investigation is continuing its investigation.

“Officers are absolutely not being charged by me at this point, but again, there’s another investigation ongoing,” he said.

Putney said that Scott was “absolutely in possession of a handgun,” and that officers also saw marijuana in his car — prompting them to act.

Amid anxiety and unease over the shooting of Scott, demonstrations in Charlotte have gone from violent to peaceful, although demands to see video of the encounter remained at the forefront of discussions for those taking to the streets.

Many of the hundreds massed outside at the Charlotte police department building on Saturday afternoon chanted the name “Keith Scott.” The 43-year-old black man was shot to death by a black officer on Tuesday.

They also chanted, “No tapes, no peace” and raised signs including one reading “Stop Killing The Black People.” Community organizers have said they expected that protests would continue in some form until the videos were released.

The city has been on edge ever since Scott’s shooting death on Tuesday. The demonstrations reached a violent crescendo on Wednesday before the National Guard was called in a day later to maintain order.

The next two nights of protests were free of property damage and violence, with organizers stressing a message of peace at the end of the week.

Charlotte is the latest U.S. city to be shaken by protests and recriminations over the death of a black man at the hands of police, a list that includes Baltimore, Milwaukee, Chicago, New York and Ferguson, Missouri.

Earlier in the week, the Charlotte protests turned violent, with demonstrators attacking reporters and others, setting fires and smashing windows of hotels, office buildings and restaurants.

Forty-four people were arrested after Wednesday’s protests, and one protester who was shot died at a hospital Thursday. City officials said police did not shoot 26-year-old Justin Carr. A suspect was arrested, but police provided few details.

On Thursday, protests were largely peaceful after National Guard members came to the city to help keep order and the mayor imposed a curfew.