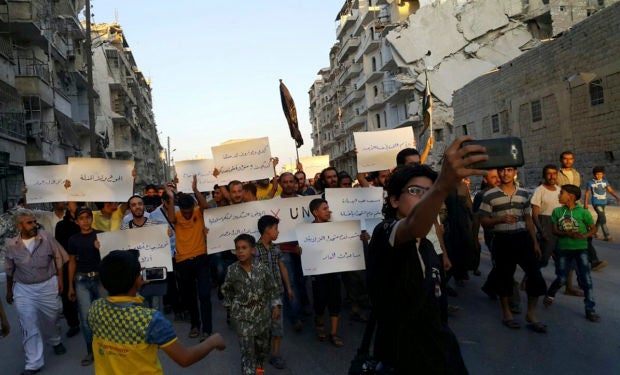 In this Sept. 13 photo provided by Modar Shekho, activists in Syria’s besieged Aleppo protest against the United Nations for what they say is its failure to lift the siege off their rebel-held area, in Aleppo, Syria. Residents in the rebel-held districts of Aleppo have a reprieve from the incessant bombings by Syrian government warplanes and the promise of an end to the crippling siege that has left produce stalls bare. AP

BEIRUT—The latest on the conflict in Syria (all times local):

The Britain-based Syrian Observatory for Human Rights said Saturday that troops and pro-government Palestinian fighters have captured the Handarat camp north of the city.

Yassin Abu Raed, an opposition activist based in Aleppo province, told The Associated press that by capturing Handarat camp, government forces have tightened the siege on the rebel-held eastern parts of Aleppo.

Syrian government forces and their allies have launched several attacks over the past five days in attempts to capture Handarat.

The camp, which is almost empty and largely destroyed, has witnessed intense fighting and bombardment in recent years. It has repeatedly changed hands between government forces and insurgents.

A UN official says nearly 2 million people in the northern Syrian city of Aleppo are without running water as security conditions deteriorate.

Hanaa Singer, Unicef representative in Syria, says intense attacks after midnight Thursday have damaged the Bab al-Nairab station that supplies some 250,000 people in rebel-held eastern parts of the contested city with water.

Singer said that in retaliation, the Suleiman al-Halabi pumping station, also located in the rebel-held east, was switched off—cutting water to 1.5 million people in government-held western parts of the city.

“Depriving children of water puts them at risk of catastrophic outbreaks of water-borne diseases,” Singer warned in her statement released late Friday.

Your subscription could not be saved. Please try again.
Your subscription has been successful.
Read Next
CIDG nabs 4 in Olongapo for drug trafficking
EDITORS' PICK
House energy committee chair Arroyo bats for cheap electricity
CBCP releases litany of thanks for better health
Omega Speedmaster super racing: Tiny device massive change
vivo Philippines offers a free bouquet of flowers and a premium necklace perfect for Valentine’s Day
US gets access to more PH bases
12-year data track poor training of PH teachers
MOST READ
Vice Ganda gets called out for ‘unfair treatment’ of ‘It’s Showtime’ co-host Karylle
Fuel price rollback expected on Feb 7
NorthPort, Bolick reach temporary solution to impasse
Sandara Park ‘got in trouble’ for not pressing elevator button for a company head
Don't miss out on the latest news and information.