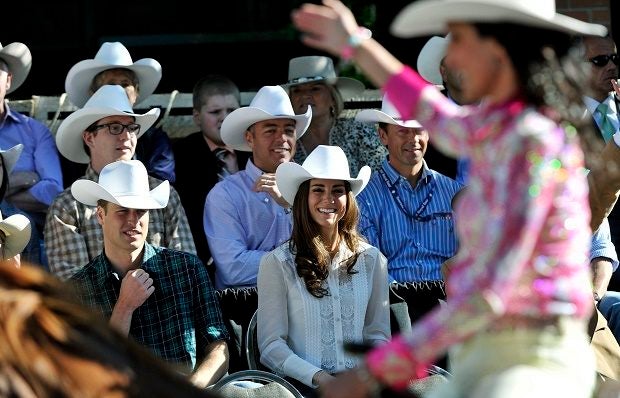 In this July 8, 2011, Prince William and Kate, the Duke and Duchess of Cambridge watch the annual Calgary Stampede parade in Calgary, Alberta. Canadians were thrilled when Prince William and Kate traveled across the country as newlyweds five years ago. Now, they will see the couple’s young children, Charlotte and George, as they travel overseas for the first time as a family of four. The trip to Canada starting Saturday marks the first official overseas jaunt for 1-year-old Princess Charlotte. AP FILE PHOTO

VANCOUVER, British Columbia — Canadians were thrilled when Prince William and Kate traveled across the country as newlyweds five years ago. Now, they will get a glimpse of the couple’s young children, Charlotte and George, as they travel overseas for the first time as a family of four.

The trip to Canada starting Saturday marks the first official overseas jaunt for 1-year-old Princess Charlotte. Her older brother Prince George, 3, is an old hand at royal travel, having already visited Australia and New Zealand on an official tour.

“That brings an extra level of excitement to the visit,” Victoria Monarchist League of Canada member Bruce Hallsor said.

As newlyweds for their first official trip as a couple, the Duke and Duchess of Cambridge won raucous cheers and endeared themselves to Canadian crowds with a skillful mix of royal pomp and playful informality. On this visit the royals will visit British Columbia and the Yukon after accepting an invitation from Prime Minister Justin Trudeau, who will host them this weekend along with his wife Sophie.

While Australia, Jamaica and Barbados have talked about becoming republics, there is less debate in Canada about replacing Queen Elizabeth II as the figurative head of state. Canadians are somewhat indifferent to the monarchy, but most have great affection for the queen, whose silhouette marks their coins, as well as her grandsons and Kate.

The trip is Prince William’s second to the Pacific Coast province of British Columbia. He accompanied his father, Prince Charles, and his brother Harry in 1998, 11 months after the death of their mother Princess Diana.

The children will not be with their parents as they are welcomed to Canada at British Columbia’s ornate government buildings in the provincial capital of Victoria. And the kids will stay behind in Victoria while their parents travel.

Far from Victoria’s marbled halls and manicured lawns, the royal couple will move to Vancouver on Sunday for a visit to the city’s gritty Downtown Eastside, a dozen square blocks of poverty and addiction. They’ll have tea with residents at Sheway, a support program for pregnant women and new mothers dealing with addiction and other challenges. William’s mother Diana was on hand when Sheway’s precursor opened in Glasgow, Scotland in 1991.

Sheway client Kelly Hamilton said excitement at the center is growing in anticipation of the royal visit.

“If I were picked (to have tea), I’d be very nervous, she said. “I wouldn’t want to discuss my past addiction with the prince.”

Hamilton said she hopes the visit will raise awareness of the center’s work.

The royals will then visit an immigrant welcome center where they will meet with a newly arrived refugee family from Syria. More than 30,000 Syrian refugees have arrived in Canada since Trudeau was elected last fall.

On Monday, the royal couple head by floatplane to the isolated coastal aboriginal community of Bella Bella. There, William will visit the now-protected, 24,711-square-mile (64,000-square-kilometer) Great Bear Rainforest. On Wednesday they’ll visit the Yukon and Thursday the royals will be back in Victoria for a private children’s tea party with military families.