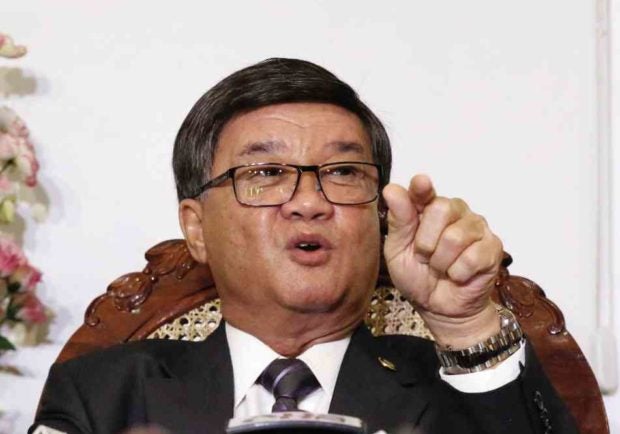 De Lima earlier said that Sebastian was a government asset. She said he has given the government useful information that led to the December 2014 raid in the Bilibid.

The senator initiated the “Oplan Galugad” or the series of raids inside the New Bilibid Prison. The first raid was on Dec. 15, 2014 where members of the National Bureau of Investigation (NBI) seized firearms, illegal drugs, cash, jewelries and posh appliances inside the prison. Nineteen high-profile inmates were then transferred to the NBI to prevent them from continuing with their illegal activities. Sebastian was not included.

Before the end of 2014, De Lima gave the Bureau of Corrections (BuCor) two weeks to dismantle all kubols.

“I told them not to wait for me to be the one to do it…I reiterated that if Jaybee Sebastian has a kubol, it should be dismantled. Do not wait for me to do it,” De Lima told reporters in a previous interview.

Aguirre said if Sebastian was a government asset, he should not have been included in the list of investigative agencies as among the personalities involved in crimes.

“Also, if it is true that he was an asset, it is stupid to separate Jaybee from the Bilibid 19 [inmates transferred to NBI after De Lima’s first Bilbid raid],” Aguirre said.

“Why did you separate him from the other high-profile inmates?” he added.

During the House of Representatives inquiry into the proliferation of illegal drugs inside prison, Aguirre presented a documentary that featured Sebastian’s posh office inside the prison. RAM/rga

Read Next
PNP begins inspection of Crame offices, restrooms
EDITORS' PICK
Gordon calls 2 Pharmally execs ‘Senate fugitives’ after no-show in probe
What’s at stake for every fighter at ONE: NextGen
Isko Moreno bares ‘two-pronged’ approach to rehabilitate MSMEs
NCR’s COVID-9 alert level may be downgraded from 3 to 2 soon — DOH
Legarda emphasizes role of ICC/IPs in nation building this IP month
Climate Change Commission and Nestlé PH to discover sustainability-focused solutions
MOST READ
LJ Reyes says Paolo Contis made ‘no efforts’ to talk to her after their split
Despite being called arrogant, Yang says he ‘loves’ PH and ‘loves doing business here’
PDP-Laban Cusi wing Senate bets willing to give way to Duterte
Drivers with no traffic violations can now renew licenses for 10 years
Don't miss out on the latest news and information.