BAGUIO CITY—In her 2009 novel, “Butterfly People,” Robin Lim writes of the power of touch, prayers, songs and breast milk that nurtured a child born with the help of a traditional “hilot” (midwife) during the Spanish colonial rule in the Philippines circa 1889. 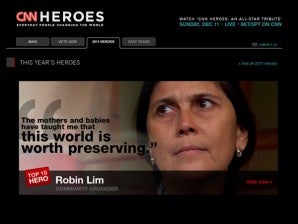 The novel’s first chapter, “Vicenta,” talks about a baby who grew up to be a healer. She learned how herbs and natural food work to cure the sick and relieve their pain.

Lim, 54, molded this character straight out of her maternal grandmother, Vicenta Munar Lim, who was a midwife and a traditional healer in Baguio during World War II.

Her grandmother inspired Lim to pursue traditional healing practices and become a midwife in a small village in Nyuh Kuning in Bali, Indonesia.

Her service to Balinese mothers, through the Yayasan Bumi Sehat (Healthy Mother Earth Foundation) that she established in 2003, led to her nomination to the CNN Heroes of 2011.

Born to an American soldier and a Filipino mother, Lim is a certified professional midwife affiliated with the North American Registry of Midwives and the Ikatan Bidan Indonesia.

“Lola Vicenta had such a profound influence on my life that I did not identify with my American-half. I became deeply Filipino, like my mother, and my lola, so much so that when I was a teenage mother-to-be, I chose to give birth, not in a hospital with a doctor, but with a midwife,” Lim told the Inquirer in an e-mail interview.

Her daughter, Deja, was born “gently and safely at home.”

“My midwives did not take the baby from me, to sleep in a nursery. They did not immediately clamp and cut my baby’s umbilical cord, she did not experience birth trauma and I was supported to breast-feed and bond securely with my newborn,” she said.

CNN described Lim as a “community crusader” who is affectionately called by people touched by her foundation as “Ibu Robin” (Mother Robin).

A CNN story posted on its Heroes’ Web page said Lim’s foundation wanted to address the problems of poor mothers in Indonesia who could not afford prenatal services and could not even take their babies home until they could settle their hospital bills.

The foundation, through the help of donors, established a clinic and a birthing facility that provide free prenatal care, birth and other health services.

Lim said she wanted to advocate traditional healthcare that is affordable and accessible to people, especially the poor.

She said she takes her work as a midwife and her advocacy for reproductive health as “very personal.”

“Medical interventions beginning in her youth led to hypertension-related difficulties with Christine’s heart and circulation. Toward the end of her pregnancy, she suffered a stroke in her sleep and never woke up … My sister and the baby she was carrying died in the United States … They died in the country that spends more money on pregnancy and birth technology than any other country in this world,” Lim said.

She said the advent of Western medicine made the work of the hilot impossible.

Lim said there should be a reinvention of the health-care system by including holistic medicine such as acupuncture, homeopathy, herbal medicine and physiotherapy.

“Doctors and midwives, in particular, must practice in a culturally appropriate manner, including the hilot on the birth team. I have seen this working in Mt. Province in the Philippines, and my organization, Bumi Sehat, instituted it in Aceh post-tsunami (after the 2004 tsunami),” she said.

“We taught them to use these communication devices and we work closely with them day to day. When a woman in the villages goes into labor, the family seeks first the help of the hilot. This wise, usually elder, woman then calls the qualified midwives at the Bumi Sehat clinic and they work together, for the safety of the mother and baby,” Lim said.

“If the family wishes to have the birth at home, our ambulance brings a midwife to assist the hilot. If they wish to come to the clinic, then our ambulance picks up the mother, her hilot and the entire family, so they can bring that feeling of home into our clinic. This is a lifesaving partnership,” she added.

“Eleven years ago, I witnessed it working high in the Cordillera mountains. I feel it can work the world over,” she said.

Lim spent part of her youth in Baguio from 1966 to 1968. As a child, she experienced how her grandmother nurtured her back to health when she suffered from a kidney ailment.

She related an instance in 1968 when doctors at Camp John Hay here wanted to fly her to Clark Air Base in Pampanga so she can be checked by doctors there, but her 78-year-old grandmother intervened.

“She took me to her small house, then not much more than a hut, in Sta. Scholastica and she took care of me. She fed me strong tea with the hair of corn from her garden, she massaged me and taught me how to garden and cook on a wood fire,” Lim said.

“She told me stories [about the] war and [what happened] before. She healed me. It was more than a healing, she polished my heart in a way that my life, even at age 11, found its purpose. My purpose from that time on was to find the skills and power necessary to become like her, a healer, a strong woman, connected to the ways of nature,” she said.

In 1998, Lim, her husband William Hemmerle, and their five children lived with her cousin’s family in Sta. Scholastica Village here for a year.

She spent her time in the Philippines by providing free natal services to relatives and friends she met in Baguio and other Cordillera provinces.

Frederick Lim, her cousin, said the house’s ground floor was converted into a small clinic.

“At first, I was apprehensive because she might be questioned by authorities because she was not licensed here. She was a guerrilla midwife here. However, my friends appreciated her work especially that she would provide her services free. They said, ‘You’re lucky to have her around,’” Frederick said.

She said the family is campaigning for Lim through the social networking sites Facebook and Twitter. She said they were also talking to local officials to support the campaign.

Remy said she even wrote Efren Peñaflorida, the CNN’s Hero of the Year in 2009, to solicit support for her cousin.

Lim said she dreams of establishing a childbirth center in Baguio that would help poor mothers.

“This alternative to either accepting the hospital model of childbirth or staying home to give birth with little or no help, would save lives and empower the mothers,” she said.

Her campaign to become a CNN Hero is not for personal glory but for every mother in the world, she said.

“It is the new mothers, who give birth in small dimly lit rooms, all over our planet, day and night … they are the true heroines. When I ask people to vote for me, I know it is not for me that I want to attain the [honor of becoming the top] CNN Hero, I want it for [them],” she said.

Read Next
Group calls for AFP pullout in Arakan
EDITORS' PICK
Acer starts the year off strong with the Aspire Vero National Geographic Edition
The best of bayside and city living at SMDC’s Sail Residences
EDITORIAL: Protecting the polls’ integrity
COVID-19 virus spread slowing down in Metro Manila, says OCTA Research
Over 3 Million worth of prizes to be won at Smart Padala’s SENDali Manalo Promo!
Comelec junks petition to scrap Bongbong Marcos COC
MOST READ
In Batanes, octogenarian dies of COVID-19
Drug lord Espinosa tried to escape through air vent at detention facility – NBI
When to get boosters after positive COVID test
Marcos Jr. visits Cebu, stands as ‘ninong’ to mayor’s son
Don't miss out on the latest news and information.