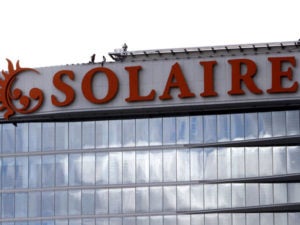 MANILA — Integrated gaming resort developer Bloomberry Resorts Corp. refuted on Thursday an allegation of a murder convict who acted as a witness at a House of Representatives hearing that someone from its management team was involved in coddling illegal activities.

Bloomberry, owner and developer of Solaire Resort & Casino, issued a statement to the Philippine Stock Exchange to dispute the testimony of one Anton Tan on Wednesday’s congressional hearing on the drug trade and other anomalies at the national penitentiary, New Bilibid Prison in Muntinlupa City. Tan alleged that money was given in Solaire to a certain Jose Adrian “Jad” Dera on the instruction of one Peter Co, another convict.

He said that Peter Co knew someone in the management of Solaire and borrowed money from that person. On further questioning, Tan clarified he did not witness Co going to Solaire.

Solaire Resort and Casino, is one of the most popular entertainment destinations in Metro Manila.

“Solaire has an average of 14,000 guests on a daily basis to enjoy its world class gaming, entertainment and dining options. While Solaire maintains stringent security measures to ensure a safe environment for its guests, it will not be able to scrutinize every private transaction among its guests,” Bloomberry said. “However, Solaire will not tolerate being the venue of any illicit activities by its guests, officers or employees.”  SFM