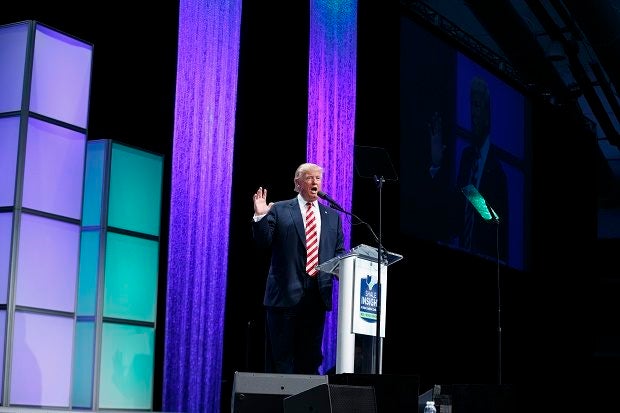 WASHINGTON — Donald Trump’s advisers are urging him to keep his cool during next week’s presidential debate and resist attempts by Hillary Clinton to provoke him with questions about his business record, wealth or controversial comments about minorities.

The focus underscores the campaign’s concern that too many Americans still don’t believe the Republican has the temperament to be president, which could be a difference-maker in a close race with Clinton.

“He can’t let Hillary get under his skin,” said Newt Gingrich, the former House speaker and Trump adviser.

Gingrich is part of a rotating cast of politicians and policy experts traveling with Trump on his private plane for mid-flight debate preparations, according to Republicans familiar with the preparations. Others include retired Lt. Gen. Mike Flynn, who is advising Trump on national security, and economist Peter Navarro. New Jersey Gov. Chris Christie, a loyal Trump supporter, has been helping on issues such as the federal government’s relationship with the states.

Trump has eschewed the kind of mock debate setups candidates traditionally use to get ready for the high-pressure events and hasn’t tapped anyone to play Clinton in his prep sessions. But aides say he is studying written briefing material on domestic and international issues and is also talking through topics with advisers.

Some Trump aides are more concerned about Trump’s disposition on the debate stage than his command of the issues, according to Republicans who insisted on anonymity because they were not authorized to publicly discuss the private debate preparations.

In particular, Trump advisers are trying to steel him for the likelihood that Clinton will aim to get a rise out of him on live television in front of what both campaigns expect to be a record-setting audience.

The Republican has long lashed out at critics in deeply personal ways, especially after a perceived slight. Clinton has raised that habit as evidence that Trump is too thin-skinned to be trusted with nuclear weapons and other life-and-death decisions that cross a president’s desk.

It’s unclear how aggressive Clinton will be in trying to bait Trump during Monday night’s faceoff at New York’s Hofstra University. On the campaign trail and in television ads, she’s targeted Trump’s criticism of a US-born judge of Mexican descent, his feud with an American-Muslim family whose son was killed in Iraq while serving in the Army and his mocking of a disabled reporter. She’s also challenged his business success and suggested he isn’t releasing his taxes to the public because he’s not as wealthy as he contends.

“We have no doubt that his handlers are prevailing on him to arrive at the debate more subdued and to try to suppress his true self,” said Brian Fallon, Clinton’s spokesman. “Clearly his advisers agree that that is not a very presidential image.”

Trump backers say the real estate mogul is prepared to stay steady no matter what Clinton throws at him.

“We’re going to see the debate prep making sure that she’s not going to be able to pull him somehow off the message,” said Rep. Chris Collins, a New York Republican who is one of Trump’s most loyal backers in Congress. He spoke shortly after joining other supportive lawmakers for a meeting Thursday with Trump political director Jim Murphy.

Collins said the Republican nominee understands the importance of presenting “President Trump to the American public.”

Trump has had more success staying on message following an August campaign shakeup and he’s given in to his new senior team’s insistence that he stick to a more scripted message during campaign rallies. The debates will be the biggest test of whether he can keep that up for 90 minutes of live television with his political opponent standing just a few feet from him.

In an interview Thursday morning on “Fox and Friends,” Trump said he would “stay cool” in the debate.

But during a Thursday night rally in suburban Philadelphia, Trump revived his efforts to cast Clinton’s stamina as weak.

“Where is Hillary today?” he asked. “They say she’s been practicing for the debate. Some people think she’s sleeping.”