Ola, not Malvar, was last general to surrender, say sons 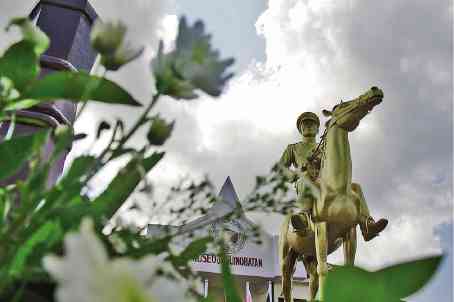 Albay’s commemoration of the birth of Gen. Simeon Arboleda Ola and his heroism was a bit different for his descendants after several historians started considering Miguel Malvar the “last Filipino general to surrender to the Americans during the end of the Philippine-American War.”

Col. Fausto Ola, the hero’s eldest son, and his brother Thomas have been convincing people that their father should be remembered for his bravery and love of country worthy of emulation and for being the last general to surrender, not Malvar.

On Sept. 2, residents of Ola’s hometown of Guinobatan in Albay, led by Mayor Gemma Ongjoco, paid tribute to his heroism during the 20th provincial commemoration of the Bicolano hero on his 151st birthday. Local officials laid wreaths at the Ola National Shrine in his honor.

“Ola had a prolonged resistance against the Americans because of his love for Bicol and for the whole country,” said historian Pio Arsenio Mariño Labanan, chair of the town’s Cultural Heritage and Arts.

One of the country’s top historians, Teodoro A. Agoncillo, considers Malvar the last general of the First Philippine Republic to give up to the Americans on April 13, 1902. “Agoncillo is from Batangas province, so naturally, his drumbeating for Malvar was excellent until such time that it was found out that Malvar surrendered earlier by two years,” Labanan said, referring to the claims of his professor in college.

Ola surrendered on Sept. 25, 1903, a year and five months after Malvar, to then Gov. A.U. Bette and Col. Harry Banholtz, along with 28 of his men and officers, on the condition that they be granted amnesty. Ola faced trial that year and was sentenced to three decades of imprisonment, but he was pardoned in 1904.

“People say, ‘Why did he become a hero, he was just hiding?’ But no, you have to know the reason why he had to,” Labanan said. He said Ola became very sick because he was shot in the left leg during one of his battles, and stayed in a cave in Mapaco in Guinobatan.

“During those times, there were pockets of warfare but they did it in hiding. What Ola and his men did was to touch and go. They fought in one place, they dispersed, and they looked for another position where they were at a vantage point. Generally, he had an advantage simply because his enemies did not know the terrain,” Labanan said.

Ola’s battles often were unsuccessful and led to the death of some of his men. His enemies did not take his “insurrection” seriously but admitted that they were hard to fight because of the intelligence information they were getting from locals. Ola was armed only with a machete, bolo and guns that sometimes did not have bullets.

His enemies tried to negotiate his surrender many times. “There was a time when he was offered money by Major Jesse Garwood and Ramon Santos to surrender, but he was so furious at the idea that he declined the negotiation,” Labanan said.

“Not one of my bullets can be bought by all the gold in the world,” Ola is often quoted as saying during the negotiation.

Ola was 31 years old when he joined the Katipunan, a secret society formed by Filipino revolutionaries against the Spanish colonial government.

After his release from prison by the American colonial regime, Ola served for two terms as mayor of Guinobatan from 1910 to 1919.

“When he reached a certain age, we often see him taking a bath by the town plaza. I was then in Grade 4. I used to pass him by. I knew he was Ola because he was a municipal official of Guinobatan, but I did not know he was the last person to surrender to the Americans back then. As an elementary grader, I distinctly remember feeling sorry for him,” Labanan, 79, said.

The regional police command base was renamed Camp General Simeon A. Ola on Sept. 2, 1991, Ola’s 135th birthday, due to persistent demands of Guinobateños. It was called Raegan Barracks in 1900 and renamed Camp Bagong Ibalong in 1978.

Labanan also expressed dismay over the state of the museum. “This building has no budget. Not a single centavo. We only survive from the staff’s donations. It was only just recently that we were able to buy materials to replace the descriptions for the paintings,” he said.

The country needs more writers and historians to research and write about Ola, he said.

“We should awaken and remember his love for country,” Labanan said. “We don’t love our country that much anymore.”