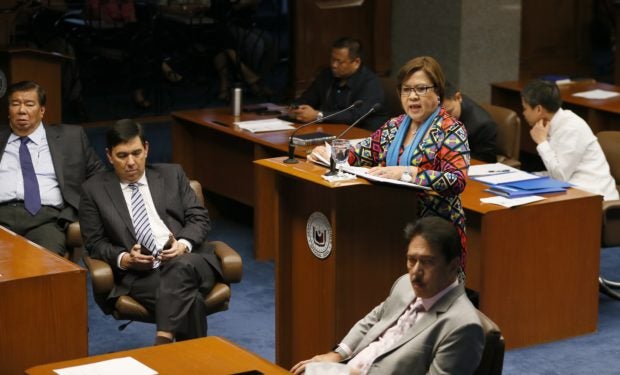 Opposition Senator Leila De Lima delivers a speech during the Philippine Senate session a day after being ousted from the chairmanship of the Senate Committee on Justice and Human Rights Tuesday, Sept. 20, 2016 at suburban Pasay city south of Manila, Philippines. De Lima, who led an investigation into President Rodrigo Duterte’s anti-drug campaign, was ousted Monday from the justice committee in a vote that human rights advocates said could derail accountability in the crackdown. Others in photo are, from left, Senators Franklin Drilon, Ralph Recto and Vicente “Tito” Sotto III. (AP Photo/Bullit Marquez)

This was how Senator Leila de Lima, in a privilege speech on Tuesday, shot back at those who she said were fabricating evidence against her.

De Lima noted that the witnesses being presented against her in the ongoing investigation of the House of Representatives were either convicted criminals, officials of the Department of Justice and the National Bureau of Investigation, who she said have an axe to grind against her or those who have “skeletons in their closet and are now being pressured to do Malacañang’s bidding at the risk of being charged themselves.”

(At this point, I want to extend my forgiveness to all who stood and will stand witness against me in the House hearing. I know that you are being forced to link me to whatever anomalies in the Bilibid, through harassment, blackmail, or probably even torture.)

(What I can’t forgive are those behind the fabrication of evidence against me. Your day will come.)

Congratulations to Senator Alan Peter Cayetano for his triumphant victory yesterday, and for making me realize that a committee chairmanship is not the end of everything for me as a senator

De Lima was also full of sarcasm when he talked about her number one critic, Senator Alan Peter Cayetano.

“Congratulations to Senator Alan Peter Cayetano for his triumphant victory yesterday, and for making me realize that a committee chairmanship is not the end of everything for me as a senator,” she said, referring to her ouster as chair of the Senate committee on justice and human rights on Monday.

A motion to declare vacant De Lima’s chairmanship of the committee as well as her membership was made by Senator Manny Pacquiao after Cayetano’s speech, criticizing her handling of the investigation on alleged extrajudicial killings under the Duterte administration.

“No committee chairmanship is worth it, if it means sacrificing my principles and surrendering the causes that I pledged my life to fight for,” she said.

“As the Bible says, what does it profit a man to gain the whole world, and yet to lose his soul? I choose to keep my soul,” the senator added.

De Lima, nevertheless, congratulated Senator Richard Gordon, who replaced her as chair of the committee, as she expressed her confidence on the latter’s capability to carry out a serious probe into the alleged extrajudicial killings.

She said she believes that Gordon was also capable of exercising the impartiality “that Senator Cayetano has repeatedly drilled into our heads I am not capable of.”

“I am fervently convinced that with his experience and no-nonsense personality, Senator Gordon will be more able to throw out any attempt to badger, harangue, abuse, or otherwise malign a witness by misleading and forcing him to admit that the reason he is testifying is because he was recruited by the Senators of the Liberal Party to trigger the ouster of the President and to put in Malacañang Vice President Leni Robredo whom the witness admitted he barely knows,” she said.

“This is the kind of pretentious and hypocrite objectivity coming from Senator Cayetano that Senator Gordon will be facing. I wish you good luck, sir. I can tell you it was not a pleasant experience for me. Not at all.

“You can have the Justice Committee as well as the offensive and un-parliamentary antics of Senator Cayetano. Package deal po ‘yan.

“On the other hand, you will still have me as a member of the Justice Committee. I promise to behave and not give you a hard time. A Senator Cayetano is enough. I will not bother you with another obnoxious personality in your hearings in the justice committee,” De Lima said.

She said it would take more than a committee chairmanship, a House inquiry, an ethics complaint, a baseless election protest, everyday tirades from the Secretary of Justice and the Solicitor General, and “vicious personal attacks” from the President to take her down. 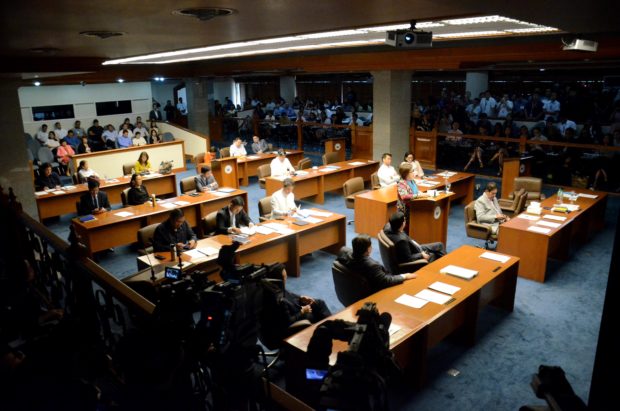 “I guess it would take two magazines of an Uzi machine pistol to take me down. As the saying goes, everything has been thrown at me except the kitchen sink. I am still waiting for the kitchen sink,” she said.

De Lima reiterated that she did nothing wrong and that she was not the one giving the country a bad image before the international media as alleged by Cayetano.

“The problem of this country and this administration is the extra-judicial killing of more than 3,000 of our countrymen in the past three months, or more than a thousand per month,” she said.

The President has already proven that he is more than capable of single-handedly giving a bad image of this country to the whole world in the short span of three months in office. He does not need any help from anybody on that aspect, least of all from me

(This is simultaneous with the President’s mouth, which without any consideration swore at the UN officials, the Pope, President Obama, and Sec. Gen. Ban Ki-moon, in spite of their desire to speak to Duterte about their concerns on his war on drugs.)

“And may I add, the President has already proven that he is more than capable of single-handedly giving a bad image of this country to the whole world in the short span of three months in office. He does not need any help from anybody on that aspect, least of all from me,” she pointed out. JE/rga