Duterte had nothing to do with De Lima ouster—senators 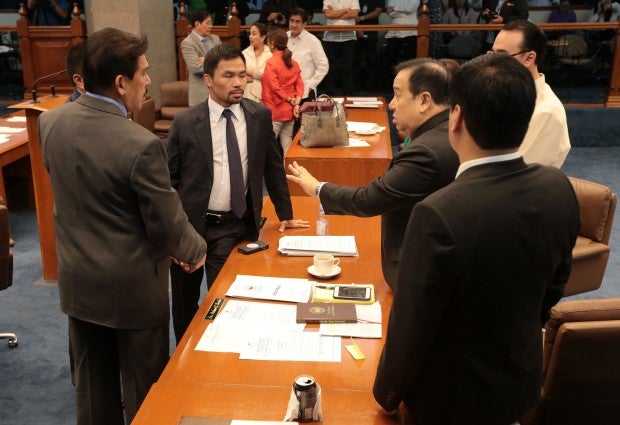 Senator Richard Gordon huddles with fellow senators after emerging from a caucus to continue their deliberation in ousting Senator Leila De Lima as the chairman of the Committee on Human Rights and Justice on Monday, September 19, 2016. Senator Gordon was voted by the senators to replace Senator De Lima.
INQUIRER PHOTO / GRIG C. MONTEGRANDE

MANILA, Philippines— Several senators on Tuesday asserted that they had made independent individual decisions to remove Sen. Leila de Lima from the chairmanship of the Senate committee on justice and human rights, contrary to her claim that President Duterte was behind her ouster.

“[I] can only speak for myself. President Duterte did not influence me at all nor did he even try to. My decision was my very own decision,” Senate President Aquilino “Koko” Pimentel III told the Philippine Daily Inquirer in a text message.

Pimentel is a key ally of President Duterte in the Senate, being the head of the latter’s party Partido Demokratiko Pilipino-Lakas ng Bayan (PDP-Laban).

Senate Majority Leader Vicente Sotto III also vouched for the independent vote, saying the majority of senators who prevailedon Monday were only after the good of the country.

A total of 16 senators voted to remove De Lima, while three of her Liberal Party mates voted no to the proposal, along with Sen. Risa Hontiveros of Akbayan, who also ran under the LP in the May elections. The minority bloc led by Senate Minority Leader Ralph Recto did not participate in the vote.

“Untrue. If it were true, Koko (Pimentel) and I will be the first to be informed by the President. He has nothing to do with the Senate’s action,” said Sotto.

He said his colleagues in the chamber “have been uncomfortable with how the hearings were being conducted.”

“Although we want an independent Senate, in the same way, we do not want an adversarial Senate. It is not healthy for the country. Independence from both subservience and antagonism is why we acted,” said Sotto.

“Independence is not just confined to not being supportive of the President. It could also be antagonistic and adversarial to the President, and we do not want both,” he said.

Sen. Panfilo Lacson, chair of the committee on public order and dangerous drugs jointly led the inquiry in extra-judicial slays, said he had no prior knowledge of the plan to call for De Lima’s removal, a move initiated by Sen. Manny Pacquiao.

Pacquiao is a junior member of PDP-Laban and strongly allied with the President, several times citing his being Mr. Duterte’s “fellow Mindanaoan.”

“First, I have not talked to President Duterte since the start of the election period. Second, nobody, much less a Senator, discussed with me the matter of reorganizing the justice committee, until Senator Pacquiao whispered to me that he would take the floor and move for such reorganization while Senator Cayetano was delivering his privilege speech,” Lacson said.

If at all there was a “conspiracy” to kick her out of the committee, Lacson said “I was not part of it.”

“I voted in favor of Senator Pacquiao’s motion based on my own belief of how Senator De Lima had conducted the hearings on the extra-judicial killings issue, particularly in the matter of (Edgar) Matobato’s appearance and testimony last Thursday. Nobody influenced my decision. Nobody ever will,” he said. Matobato claims to be a hitman belonging to the so-called Davao Death Squad organized by President Rodrigo Duterte when he was still mayor of Davao City.

Sen. Joel Villanueva also asserted that “the Senate remains to be an independent institution.” Villanueva was an independent candidate in the last elections who ran as a guest of the Liberal Party, taking the campaign trail alongside De Lima.

Senator Sherwin Gatchalian asserted that the President “was not involved in any way” in the majority decision against De Lima, adding that his decision was “difficult.”

“I have yet to speak to the President since he assumed office, and I certainly did not consult him or any member of his administration before casting my vote to remove Senator De Lima,” Gatchalian said.

He criticized how De Lima conducted the committee hearings, saying it “had become a hollow vehicle for the fulfilment of personal political vendettas.”

“We simply had to put a stop to that, both for the benefit of the Senate as an institution, and for the people this august body represents,” Gatchalian said in a statement.

“Ultimately, whether we agree with it or not, it is still a numbers game in the Senate and that’s what happened yesterday,” Pangilinan said.

He said the episode was a “reminder” of the need to maintain an independent Senate.

“This we intend to pursue. We will support measures that we believe will be beneficial to our citizens, and we will be critical of measures we believe will not be good for the country. We will not simply oppose and obstruct for the heck of it, but neither will we support and defend the Administration right or wrong,” he said in a statement.

Explaining his vote, Sen. Juan Miguel Zubiri said he had been “disappointed at seeing the Senate investigations being used to push other people’s political agenda.”

“Let us avoid using the Senate for grandstanding. I respect the power and prerogative of the Senate to investigate, but, once someone’s political agenda is involved, the whole process is derailed and public interest is forgotten,” he said.

Without making a particular reference to De Lima, Zubiri said: “If some persons want to expose certain issues about the President, their proper recourse is to impeach him. File an impeachment case. If they have an axe to grind against President Duterte, they should file a case against him instead of transforming Senate inquiries into political circus.”  SFM