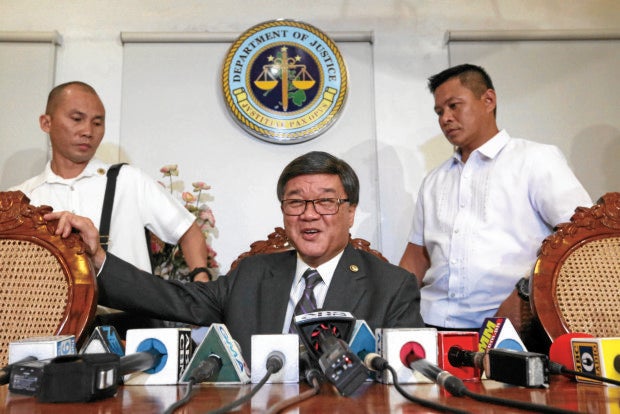 Justice Secretary Vitaliano Aguirre announces that NBI Deputy Dir. Rafael Ragos and members of Bilibid druglords will testify against Senator Leila Delima in her involvement in the drug dealings inside the Bilibid prisons while she was DOJ Secretary, at the Congress tommorow. INQUIRER/ MARIANNE BERMUDEZ

A TOP official of the National Bureau of Investigation, a protégé of Sen. Leila de Lima, will join convicted drug lord Herbert Colangco and other high profile prisoners as part of the Department of Justice’s platoon of witnesses in the House probe into the proliferation of drugs inside the New Bilibid Prison on Tuesday.

Justice Secretary Vitaliano Aguirre II said the testimonies of its 30 witnesses and resource persons led by NBI Deputy Director Rafael Ragos, Colangco and the inmates would be enough to build a case against De Lima for violation of the Comprehensive Dangerous Drugs Act of 2002.

“Just based on the affidavits, we can already file a complaint and start a preliminary investigation… the nature is the violation of the drugs law, possibly antigraft,” Aguirre said.

He said they were still waiting for bank documents they requested from the Anti-Money Laundering Council.

“We have deposit slips to show that drug money was placed in some bank accounts.  We could try to say it in testimony to have probable cause,” he said.

Aguirre said he had the names of those to be charged along with De Lima but refused to name them except for her former driver-bodyguard and alleged lover, Ronnie Palisoc Dayan, and her “favorite bosyo” (inmate boss) at the NBP, convicted drug lord Jaybee Sebastian. Aguirre said the NBI had yet to find Dayan.

Aguirre said Ragos admitted in his affidavit that he delivered on several occasions P5 million in drug money that was personally received by De Lima at her home. Aguirre said Ragos’ testimony was backed by his driver-escort, Junior Ablen.

Ragos and his wife have long and deep ties to De Lima who appointed him director of the Bureau of Corrections in 2012 before he was promoted to NBI deputy director.

According to his affidavit, Aguirre said Ragos had barely warmed his seat at BuCor when he made the P5 million delivery to De Lima.

Aguirre said the P5 million a month to De Lima was on top of the P3 million that Colangco claimed he regularly sent as payola to the then justice secretary.

Aguirre has tagged Sebastian as a key cog in De Lima’s protection racket. He spoke with some of the inmates who told him that De Lima had ordered the transfer of Sebastian’s rival bosses from the NBP to the NBI to monopolize the drug trade at the maximum security prison.

“When De Lima visited Sebastian, she told the inmates she was on an official visit and went straight to his kubol (private quarters). She visited him more or less four times and the meetings lasted three to four hours,” he said.

Aguirre claimed that Sebastian had funneled drug money to De Lima as far back as 2011 because they expected her to run in the 2013 elections.

“I think she won’t only be shaken. If she’s seated, she may fall off her chair,” Surigao del Norte Rep. Ace Barbers said.

But Barbers, chair of the House dangerous drugs committee, speaking at a forum pledged a “fair and impartial treatment” of De Lima, who would be front and center of the probe as the panel would be investigating the period during her tenure as justice secretary.

De Lima has called the hearing a “sham,” saying she won’t take part in it.

“This is not about her. This is about the proliferation of drugs in the New Bilibid Prisons,” justice committee chair Reynaldo Umali told reporters.

He said that De Lima, a former party-mate of his and a sorority sister, could rest assured of his fairness and