‘No watershed, no eagle, no water’ | Inquirer News

‘No watershed, no eagle, no water’ 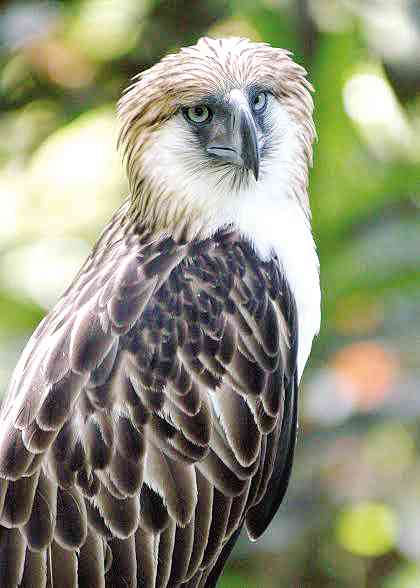 DAVAO CITY—In what is seen as a bid to hit two birds with a single stone, an all-stakeholder summit in Davao City has committed to firm up and sustain efforts to protect its treasures: a small colony of Philippine eagles and an almost limitless supply of mineral-like water rated among the world’s best.

“No watershed, no eagle and no water,” summed up Dr. Jayson Ibañez, head of the Davao-based Philippine Eagle Foundation (PEF). “Hence, to protect the eagle we have to protect its habitat.”

The PEF is one of the staunchest supporters of the city government’s program to protect a chain of watersheds that straddles Mt. Apo.

Ibañez said two pairs of eagles have been seen in the watersheds around Mt. Apo, out of an estimated 200 eagles found in Mindanao. Fiercely territorial, the birds are expected to live in the area during their lifetime.

Mt. Apo, at 2,954 meters above sea level, is also home to diverse plant and animal life, including birds such as hornbill, kingfisher and owl, and animals like deer, warty pig, fruit bat, flying lemur, squirrel and fanged frog.

The Watershed Stakeholders Summit was held in Davao City last month. Organized by the Watershed Management Council, the summit was aimed at gathering recommendations in addressing the issues like protection, conservation and management of major watershed areas. The event included a visit to the Philippine Eagle Center.

City officials said water emanating from Mt. Apo’s Dumoy wells is among the world’s cleanest, ranked next only to the Netherlands by an independent study in the 1980s.

She described Davao’s water, especially those that emerge from the Dumoy wells, as “mineral water that is not bottled.”

She said this is because water comes from a volcanic source in the bowels of Mt. Apo. Hydrological analysis by the International Atomic Agency, she said, showed the water is only 50 to 75 years old, which attests to its cleanliness.

The need to put up 36 production wells by 2031 to meet growing demand was deemed a priority, Maspinas said.

Communities, among them indigenous peoples, were tapped to help protect and monitor the watersheds. During the summit, community members were also taught to look into the composition of water such as phosphate, pH level, dissolved oxygen, nitrate and color, among other things.

Summit participants agreed to tap volunteers and forest rangers to monitor activities of informal settlers and to guard against illegal logging. They also agreed to plant more trees, including fruit trees and cacao, along riverbanks.

They promised to take the lead in ensuring that proper waste disposal practices are implemented along rivers emanating from the watersheds.