Duterte:  Another bombing may happen 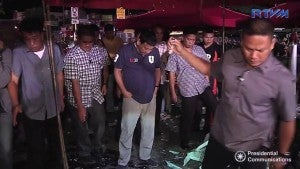 President Rodrigo Duterte stares at the ground of the Davao City night market where 14 were killed and around 60 were wounded on Sept. 2, 2016. (SCREENGRAB OF RTVM VIDEO/ Courtesy of Presidential Communications)

DAVAO CITY – President Duterte warned of another bomb explosion in the country, hinting that those behind the Sept. 2 deadly blast here were young Moro rebels.

“There will be another explosion, believe me,” the President said during a meeting with survivors and families of the victims in the night market bombing here early this month.

“If not in Davao, then somewhere in Mindanao or other parts of the country,” the President added.

Mr. Duterte said he had expected a bomb attack after government launched intensive operations against the Abu Sayyaf in Sulu.

But the President did not say who was behind the Davao bombing.

The Maute group is based in Lanao del Sur, while the Abu Sayyaf is based in Basilan and Sulu provinces.

“The young don’t belong to any organization, they are identified with the ISIS. They have sworn allegiance already to the Isis,” he said.  SFM