Duterte to give P250K to kin of those killed, maimed in Davao blast | Inquirer News
Close
menu
search

Duterte to give P250K to kin of those killed, maimed in Davao blast 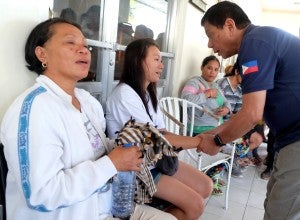 President Rodrigo Duterte comforts the families of bombing victims in Davao City at a local hospital. Fourteen were killed and 67 were hurt in the bombing at the popular city night market on Sept. 2, 2016 (Photo from the Presidential Communications’ Office Photographers Division, via AP)

DAVAO CITY – President Duterte announced on Monday night that he would give P250,000 in cash assistance to each of the families of the 15 people who died in the Sept. 2 bombing at a night market here.

The President added that the same amount would be given to 11 others who have been left disabled by the blast.

Mr. Duterte said 21 others who were still in hospital, as of Monday, would receive P100,000 each as cash assistance.

The announcement was made during a meeting between the President and the bombing survivors and the families of those who died  or were severely hurt. SFM