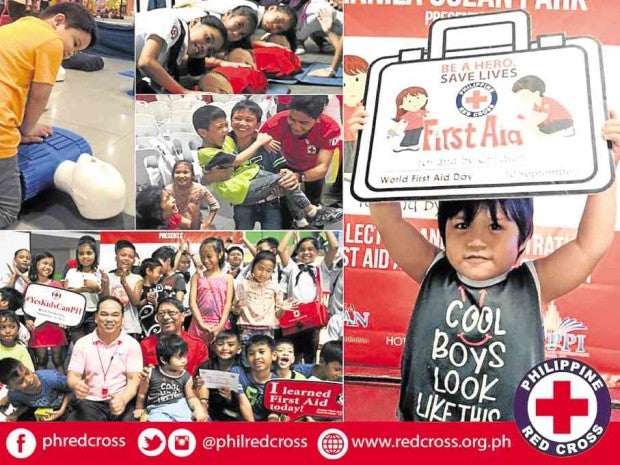 CHILDREN aged 12 and upwards learn how to save a life as the Philippine Red Cross conducted a training  program at the Manila Ocean Park on World First Aid Day. Photos contributed by Red Cross

EMPHASIZING that no one is too young to become a lifesaver, the Philippine Red Cross (PRC) recently conducted first aid training for children aged 12 and upwards.

To commemorate World First Aid Day on Sept. 10, around 200 kids were given simultaneous training and lectures on first aid and Basic Life Support (BLS)-Cardio Pulmonary Resuscitation (CPR) for both adults and infants at the Manila Ocean Park.

The audience consisted of children visiting the aquatic theme park and members of the Red Cross youth.

Under the guidance of the PRC’s Safety Services arm, they were taught techniques which could prove handy in saving the lives of their playmates, siblings, friends, even their parents.

Four stations were set up for the lectures on Bandaging and Bleeding Control, Lifting and Transfer, BLS-Adult and Child CPR, and BLS-Infant CPR.

Gordon said the training would prepare them to effectively confront and respond to life-and-death situations.

With the theme “First Aid for and by Children,” this year’s World First Aid Day—which was initiated by the International Federation of the Red Cross in 2000—aims to raise global awareness on the importance of first aid in emergency situations.

Oscar Palabyab, PRC secretary general, emphasized that most of the deaths involving kids were due to accidents in which they were not given first aid.

According to him, the younger generation plays a significant role in society as 26 percent of the world’s total population are below 15 years of age, adding that children are adaptable and can apply what they learned when they grow up.

“Being able to tap children by training them in basic first aid, among others, could mean more lives saved in times of emergency and disasters,” Palabyab said.

The PRC later signed a memorandum of agreement (MOA) with China Oceanis Philippines Inc.–Manila Ocean Park represented by Francis Low, executive vice president. Under the MOA, they agreed to maximize their services in conducting various humanitarian activities and promoting first aid programs, according to a statement.

Also launched during the event was the PRC’s mobile app First Aid PH which provides information on first aid and features instructional videos on handling common emergencies even when offline.