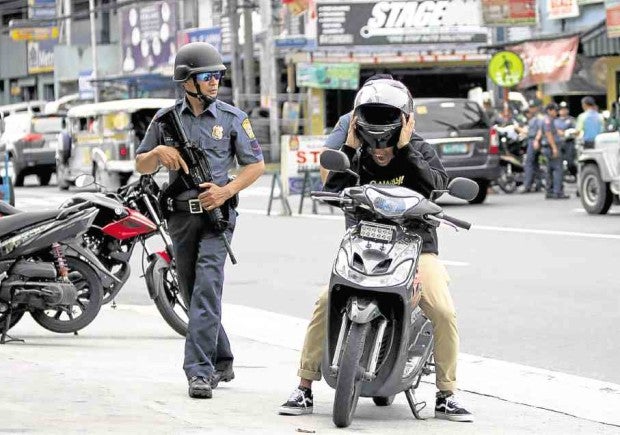 LAWMEN ROAM ‘LAWLESS’ LAND An officer manning a checkpoint on E. Rodriguez Avenue, Quezon City, orders a motorcyclist to pull over for an inspection. The police have been put on full alert after President Duterte declared a “state of lawless violence” in the wake of the Sept. 2 Davao City bombing. RICHARD REYES

MANILA — A former assistant cameraman of a big TV station in the country was nabbed for carrying shabu (methamphetamine hydrochloride) at a checkpoint in Quezon City on Sunday noon.

Dennis Ofilada, 38, was arrested by policemen from the Quezon City Police District (QCPD) Masambong Station, who were manning a checkpoint along Mindanao Avenue, at past 11 a.m.

QCPD head Guillermo Lorenzo Eleazar said the policemen flagged the suspect who was aboard a motorcycle because he was not wearing a helmet. They found in his bag seven sachets of shabu.

The cops said he presented his TV5 identification card and claimed that he was still part of the network. However, investigators discovered that the ID expired two years ago.

Seized from the suspect were 35 grams of shabu estimated to cost around P70,000 and a cellular phone where messages of illegal drugs transactions were found by the police.  SFM