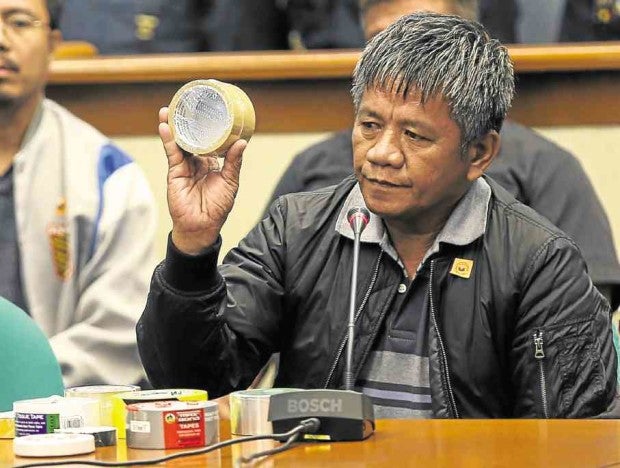 Edgar Matobato, former militiaman and confessed member of Davao Death Squad, drops bombshells during his testimony at the Senate on Sept. 15. RICHARD A. REYES/INQUIRER

“I’ve never meet that person in my whole life. Because if I had met him before, he may be dead by now because he is a hitman who has killed so many people already,” Dela Rosa said.

Dela Rosa, who graced the celebration of 115th Police Service Anniversary in Camp General Simeon Ola in Legazpi City on Friday morning, said he met Matobato for the first time at the Senate hearing on extrajudicial killings on Thursday.

“I’ve challenged those hitmen several times to a gunfight. I really just saw that face (Matobato) yesterday,” he added.

“On the other hand, I can also say that it is unfair. Matagal nila hawak yun bakit hindi pinalabas (They have held that for a long time, why didn’t they let it out)?” he said.

He said he was doubtful because the main focus of the hearing should be on extrajudicial killings related to the government’s intensified war against drugs but instead it revolved around the DDS-related killings.

“In the first place, I am baffled because the war on drugs started in July, but the DDS happened years ago,” he said.

Dela Rosa led the launching of “Kasurog Kontra Droga” (Alliance Against Drugs), a campaign of the Bicol police against illegal drugs in support PNP’s Project “Double Barrel” in Legazpi City, before going to Naga City to attend the festivities of the Feast of Our Lady of Peñafrancia, which will culminate on Saturday with a fluvial procession on Naga River.

Dela Rosa will also join in the procession that will take the image of Bicol’s patroness “Ina” to the pagoda and then  return it to Basilica Minore, signaling the end of the nine-day feast./rga