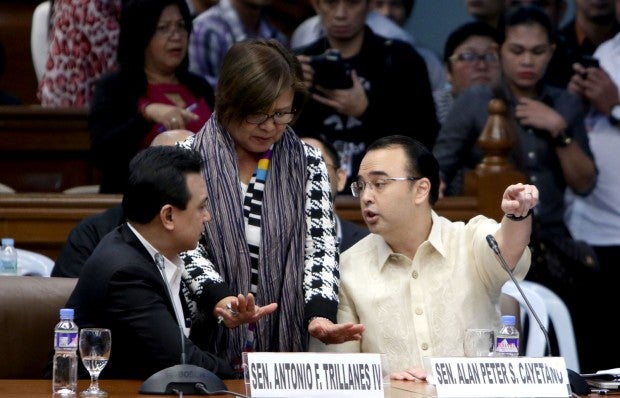 Thursday’s explosive Senate inquiry was a page borrowed from the Liberal Party (LP)’s playbook of dirty tricks, according to the camp of former Vice President Jejomar Binay, which expressed amusement at the antics of his former tormentors Senators Alan Peter Cayetano and Antonio Trillanes IV.

Binay’s spokesperson Joey Salgado characterized the hearing, which featured confessed hitman Edgar Matobato revealing President Duterte’s alleged link to a death squad in Davao City, as “a replay of the demolition telenovela” against Binay, but with a different cast of characters.

“Thursday’s hearing is a page from the Liberal Party playbook, with a minor casting change: It’s now [Sen. Leila] De Lima and Trillanes as BFFs (best friends forever), with Senator Cayetano as the spurned ex-friend,” he said in a statement.

Salgado said the public once again saw a Senate investigation being conducted “in aid of demolition, not legislation,” in which every rumor, half-truth, and hearsay was broadcast or published; every accusation accepted and presented as truth — complete with dramatic pauses and gestures — by some senators.”

“Once again, a political personality — this time no less than the President himself — has been declared guilty even before the start of the hearing,” he said.

“Once again, senators are lawyering for a witness, and the public is treated to a barrage of shocking but unsubstantiated statements on live radio and television,” he added.

Salgado said the hearing — captured live on national television — was reminiscent of the Senate investigations on the Binay family’s alleged hidden wealth as well as corruption charges during Binay’s term as mayor of Makati City.

“No family should go through the harrowing experience of the Binay family at the hands of Senate inquisitors. But no less than President Duterte and his family have been pilloried on live television by senators with patently political motives. And this looks like just a warmup,” he said.

The spokesperson reiterated Binay’s position that: “The Senate does not have the competence or the authority to determine criminal liability. Only the courts can determine guilt or innocence, not the Senate, and especially not senators with political motives.”

Salgado said he was amused by the unintentionally comic interaction between Trillanes and Cayetano at the hearing. The two senators were two of the most active participants in the Senate hearings on Binay.

“Cayetano’s conversion into a born-again advocate of due process and the rule of law is hilarious, considering that he lawyered for the accusers of VP Binay during the Blue Ribbon Subcommittee hearings,” Salgado said.

He, however, gave credit to Trillanes for his consistency.

“At least, Trillanes was true to form as the Session Hall bully, this time intimidating his erstwhile BFF. These two deserve each other,” Salgado said. IDL