The partners in the Senate probe of then Vice President Jejomar Binay’s alleged corrupt practices in Makati have turned against each other in the Senate hearing on extrajudicial killings in Davao City when President Duterte was its mayor.

Sen. Antonio Trillanes IV expressed irritation over Sen. Alan Peter Cayetano’s long line of questioning while the other charged him with talking trash to “keep his mind out of the game.”

Sen. Leila de Lima, chair of the Senate committee on justice and human rights, declared Cayetano “out of order” and called on the sergeant at arms to restrain him.

Even before his verbal tussle with Trillanes, Cayetano, Mr. Duterte’s running mate in the May elections, was already questioning De Lima’s capacity to chair the committee, saying she had to remain neutral through the proceedings.

He even accused her of “lawyering” for witness Edgar Matobato.

As soon as Trillanes took the seat beside Cayetano, he asked De Lima if there is an “unli-questioning” allotted for a nonmember of the committee.

“I think we gave him (Cayetano) more than an hour of leeway for a nonmember. That’s a luxury and now as a member, I assert my right. Otherwise, I might be moved to declare Senator Cayetano out of order for consuming the time of the committee,” Trillanes said.

When Cayetano cut in, he said, “OK with that.  I am moved to declare Senator Cayetano out of order because he is a nonmember of the committee,” to which Cayetano replied, “You’re censoring me?” 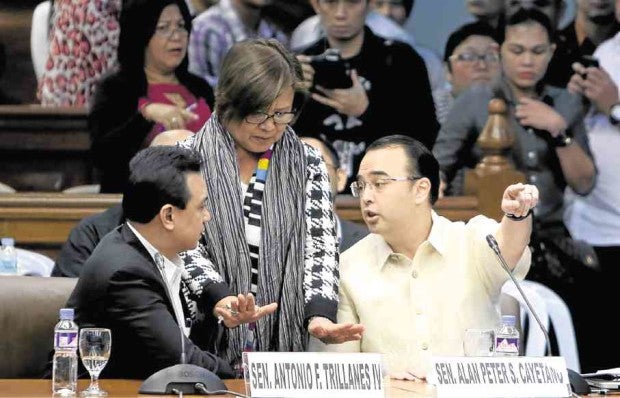 De Lima was compelled to declare a two-minute break to allow cooler heads to prevail.

As soon as the proceedings resumed, the two senators continued their exchange, prompting Cayetano to call a point of order.

“May I just sit here and listen to you without being intimidated because my seat mate here (Trillanes) here is intimidating me. I am trying to ask questions, he told me here: ‘Hindi kita papapormahin’ and then he tells me here, ‘Nabubuo ba ang pangarap mo? You are defending evil etcetera’ So Madam chair I’m trying to get to the bottom of this and kung totoo ang sinasabi.”

“He will tell me those things. Trash-talk me. Perhaps as a senator, I never did that to any of my colleagues and I consider him a friend. I can move. Can you make sure he doesn’t follow me?  I will listen to you. If it takes you two hours, I will follow,” Cayetano complained.