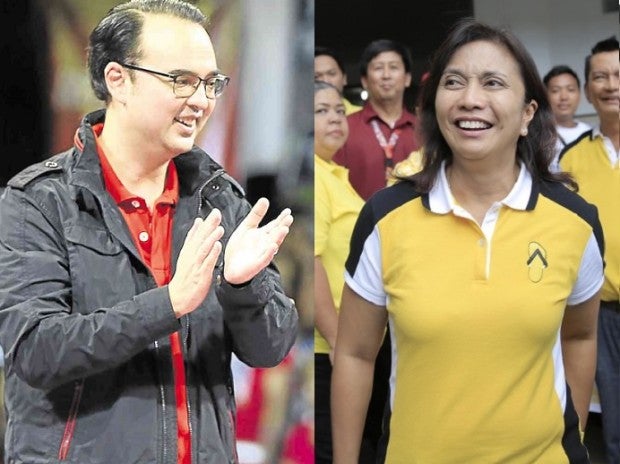 Vice President Leni Robredo on Thursday took umbrage at Sen. Alan Peter Cayetano’s insinuation at Thursday’s Senate hearing that the Liberal Party (LP) was behind moves to unseat President Rodrigo Duterte to install her to power.

In her strongest words yet to defend her own party, Robredo said she was offended by the senator’s remarks during the testimony of Edgar Matobato, a self-confessed member of the “Davao Death Squad,” in which Cayetano linked her and her party to a supposed “Plan B” to seize power.

Matobato was grilled by Cayetano about purported inconsistencies in his explosive testimony, in which he accused President Duterte and his son, Davao City Vice Mayor Paolo Duterte, of being behind the squad notorious for summary executions in the city.

“Related to this ongoing investigation, we are offended by Senator Cayetano’s accusation that the Liberal Party is plotting to oust the President and that I will be the intended beneficiary of this plan,” Robredo said.

“The allegations raised by Senate witness Edgar Matobato are serious. We must exhaust all efforts to get to the truth with due regard for our democratic processes and the rule of law,” she said.

“I enjoin the public to remain vigilant and discerning as the investigation unfolds,” said Robredo, a member of Mr. Duterte’s Cabinet as chair of the Housing and Urban Development Coordinating Council.

She earlier denied any truth to speculations that the LP, the ruling power before the President swept into power in the May elections, was plotting to wrest power.

“In yesterday’s Cabinet meeting, I personally made the assurance that no such plan exists and we continue to support the reforms of this administration,” Robredo said.

On Monday, Mr. Duterte accused “the yellows” of being behind efforts to build a case to impeach him, an allusion to LP’s signature color.

While denying the supposed LP plot, Robredo said she remained behind Mr. Duterte, adding that another political maelstrom was the last thing the country needed at this point.

“As I have reiterated time and again, it is not good for the country to go through another period of upheaval, where the common Filipino will suffer the most,” she said.

Read Next
Tugade eyes moving DOTr to Pampanga
EDITORS' PICK
PH logs 7,302 new COVID-19 cases — DOH
Taguig exceeds daily COVID-19 vaccination target of 6,800 individuals for 3 days
Robredo urges supporters: Don’t think we’re the only ones who are good
Alex Eala wins Grand Slam on Independence Day: ‘I hope I made my contribution to the country’
Ahead of ONE: Full Blast II, Mongkolpetch warns Elias Mahmoudi: ‘Watch out for my fists’
Kai Sotto continues to inspire Filipinos by sharing his passions and stories with Smart Prepaid
MOST READ
China cautions G7: ‘small’ groups don’t rule the world
PH to have cloudy, rainy Monday — Pagasa
Leni vs. Sara
Rare earth metals at the heart of China’s rivalry with US, Europe
Don't miss out on the latest news and information.