Senators clash over questioning of confessed assassin at hearing

Senators clashed on Thursday over the testimony of a confessed assassin, who tagged President Rodrigo Duterte as being behind the bombing of a mosque and killings of several people in Davao City.

A verbal exchange ensued first between Senators Alan Peter Cayetano and Leila de Lima when the former asked the witness, Edgar Matobato, who would replace Duterte if the latter was removed from office.

When Matobato could not immediately give an answer, Cayetano questioned how the witness could remember all other names he mentioned except that of Vice President Leni Robredo.

“Ahh si Ma’am Leni Robredo,” the witness finally said during the joint hearing of the Senate committee on justice and human rights, and public order.

When De Lima, chairman of the justice committee, took the mic to clarify some questions for the witness, Cayetano immediately cut her off and reminded her that she was not Matobato’s lawyer.

“The record will speak for itself…Madam chair, you’re not his lawyer. You are the chairman of this committee,” Cayetano said. 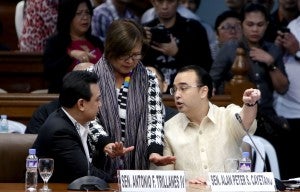 The lady senator retorted, saying Cayetano’s statement was not true.

Cayetano went on, saying, “You can interject but it’s within my rights Madam chair so may I plead with you, you  brought the witness here, nagte-testify sya, I’m testing his credibility, I’m testing his motives. Can you just allow me to do it my way?”

De Lima then acceded to Cayetano, who went on to squeeze the witness.

But after a while, Senator Antonio Trillanes IV questioned the lengthy questioning of Cayetano, a non-member of the committee, and moved to declare the latter out of order.

“I’d just like to inquire if there’s an ‘unli’ (unlimited) questioning allotted for a non-member of the committee? I believe we gave him more than an hour of a leeway for a non-member. That’s s a luxury…” Trillanes said, adding that he might be forced to move to declare Cayetano out of order for consuming the time of the committee.

And when Cayetano insisted on continuing his questioning to the witness, Trillanes made his motion official to declare his colleague out of order.

This prompted De Lima to suspend the proceeding. CDG/rga

Read Next
Rep. Nograles: No supporter of ours was killed due to politics
EDITORS' PICK
Maharlika fund tweaks leave it with P110 billion
The vivo Y02 is now available in the Philippines for only PHP 5,299
Commander in chief inaugurates Turkish choppers
House energy committee chair Arroyo bats for cheap electricity
Filipinos still mostly optimistic, says poll
Shop smarter with vivo’s big 12.12 holiday deals
MOST READ
MIF ‘beyond repair,’ says nat’l scientist in economics
Agony and anger for Brazil as World Cup favorites crash out
Pagasa says rain likely this weekend due to LPA that may turn into storm
Commander in chief inaugurates Turkish choppers
Don't miss out on the latest news and information.